Cozumel is known as a diving destination because of the blue waters and the visibility that seems endless. Seriously, you jump off the boat and 100 feet looks about 10 feet down. And before you know it, there are places you are 100 feet down.

On top of being a SCUBA diving destination, it is also a cruise ship destination. They told me that Wednesday’s are usually busy days in the Cruise ship ports and you could see as many as 6. They also warned to steer clear of town during the day. But This particular Wednesday there were 2 ships in port and that was it. There was also a cruise ship that made headline news with a lady near Houston, Texas, and apparently that cruise ship was in port here at Cozumel either Wednesday or Thursday. How weird is that? I really don’t know all the details, just heard bits and pieces of it. 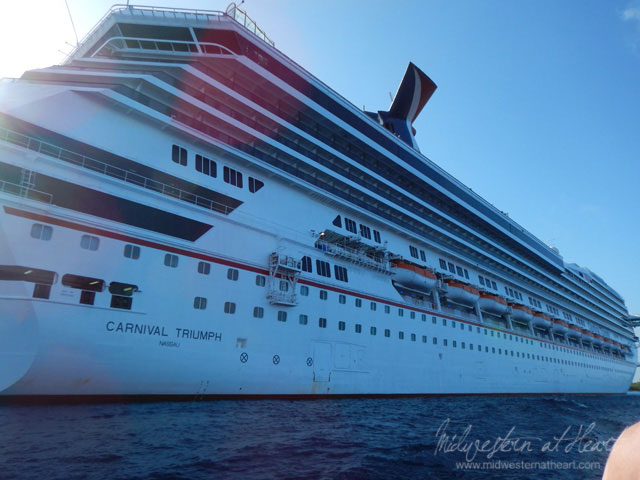 Anyway back to our dive trip. We kept laughing because I swear these two are twins from another mother… not just brothers. A couple different times they showed up dressed similar if not exactly like each other and I just so happened to document one of the times. 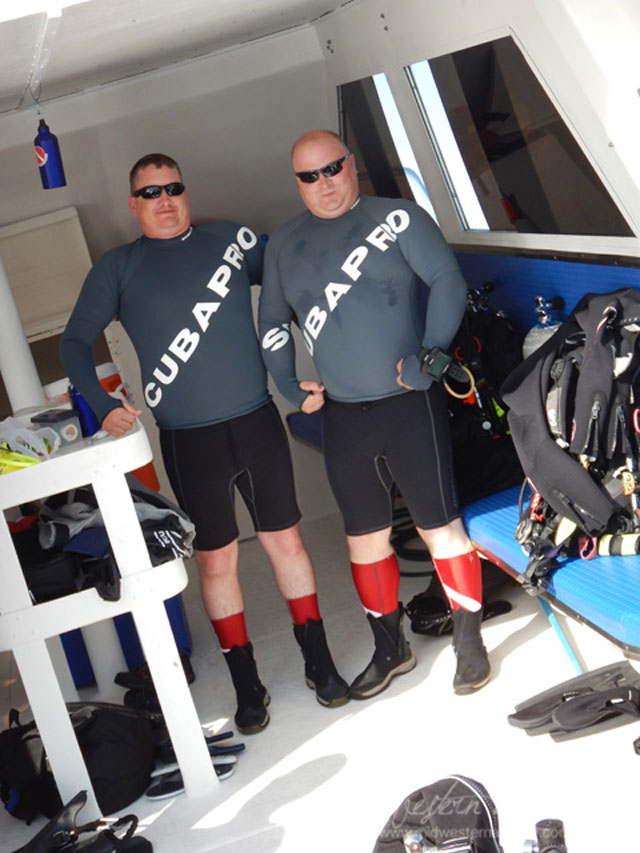 Karen laughed at me because if you remember, I told you that Tuesday of this trip I sunburned my legs something fierce. They were as red as a cooked lobster, no joke. But I can’t seem to keep my feet out of the water So I put on sunscreen, put on my dive socks, and put on my wet suit and went and sat on the back of the boat with my feet on the deck in the water. Karen said, did you put your wet suit on just for that. Yes, I did. 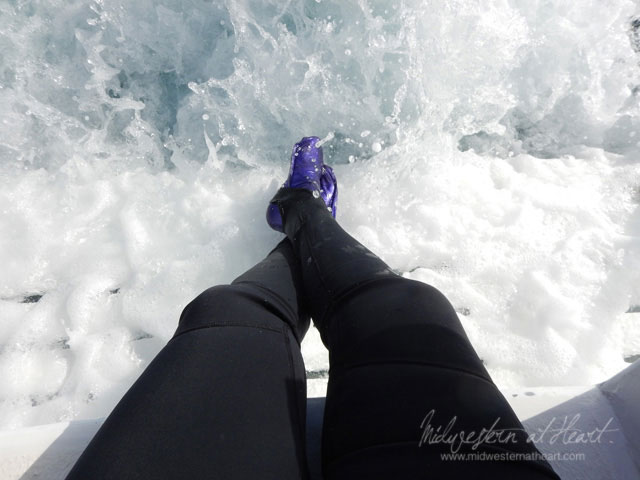 Then we were off in the water again. On Wednesday I dove again with 20 lbs. I started to get a little more comfortable and Grady gave me some pointers which were extremely hard to do, but I tried. Pointers, quit flapping your arms (so hard) and use your fins to help you turn.

I was also the laughing stock because most wetsuits zip in the back but the particular one I was in zips in the front. I kept getting hot on my dives so I kept unzipping my wetsuit while diving. The water in Coz was between 84-86˚. While you think that’s hot, when you’re surrounded by water it is a different story, but it was a good temperature still. I wound up diving our afternoon shore dive in just my long sleeved rash guard and swimsuit. 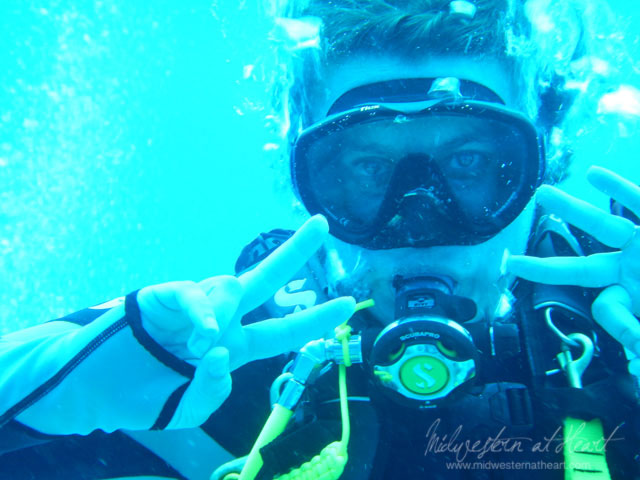 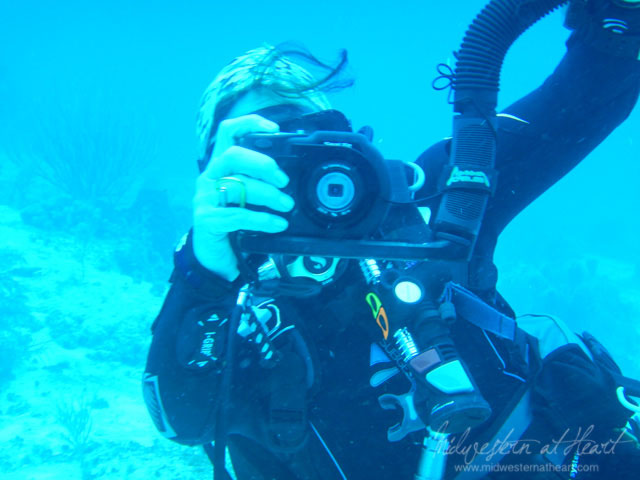 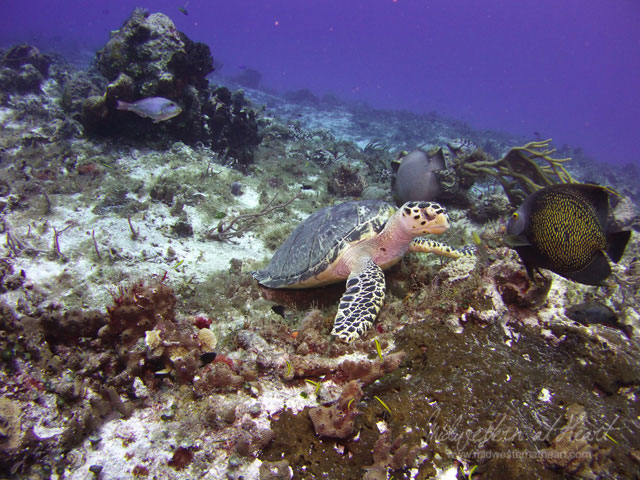 This barracuda loved our group. Normally they are attracted to shiney things, but not sure what he liked about our group. He made one entire dive with us and really stayed close to Karen. 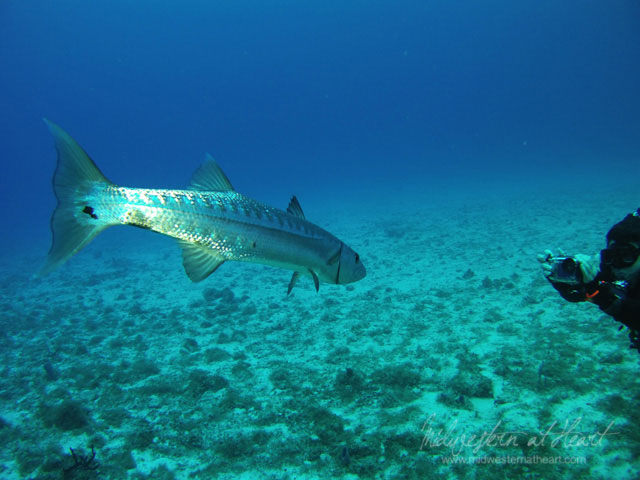 Then there was the shark. Now, everything looks bigger underwater. Apparently including sharks. And this shark was a huge topic of discussion. Oh my… So… lots of pictures were taken of this shark. Then there was a huge debate on how big this shark actually was. Some (ahem Deb) said 4 feet while others (ahem Dan) swore up and down 6 feet. Then…. those who swore 6 feet (ahem Dan) had to publicly apologize on Facebook for being wrong. Now I’m going to say I wasn’t involved in the debate because I didn’t even see the shark…

Also… a lot of people have a FEAR of sharks. These sharks were nurse sharks and reef sharks. Not Great White Sharks. Nothing seen like in the movie Jaws. I was one of those people with an irrational fear and after this trip, I’m okay with them. Although if I came face to face with a Great White Shark, I might go ghost white. Oh wait, if I’m not sunburned I am pretty white so maybe that’s not a good comparison….. 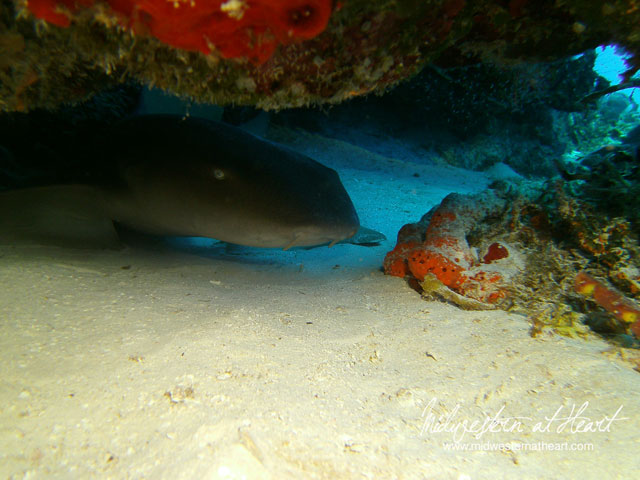 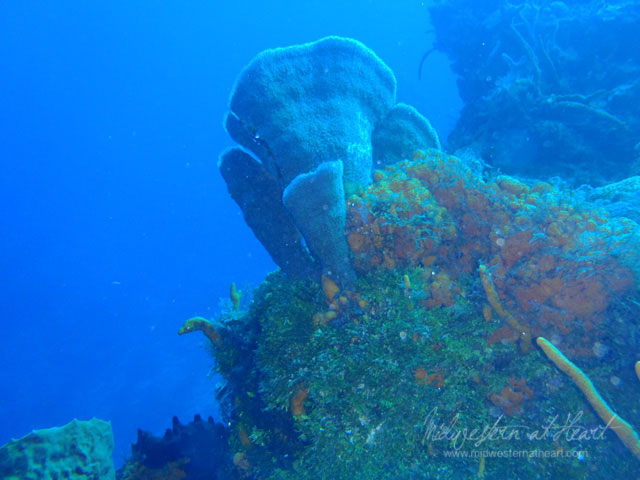 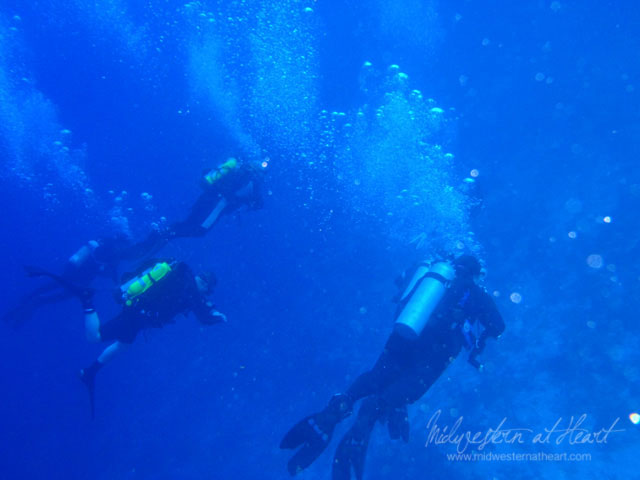 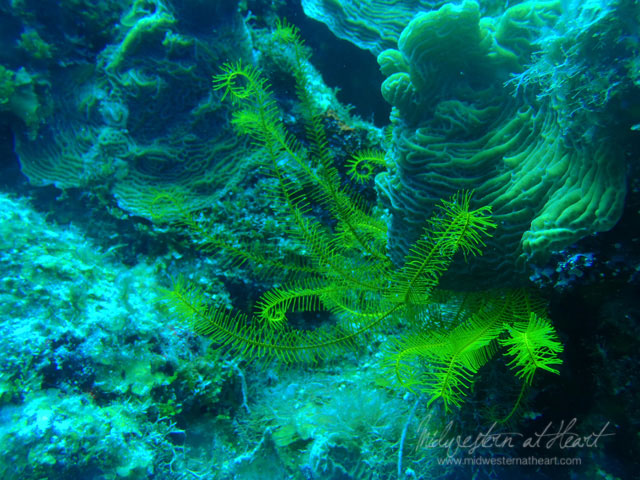 As I mentioned yesterday, most on this trip dive steel. One thing about a steel tank is they are heavier than an aluminum tank so you don’t need to weight yourself as much. I’ve dove with the hubs rig once and it was a steel tank but I wanted to dive a steel tank. Grady didn’t want me to try first time out in the ocean on a deep dive and I concur with that notion so we borrowed a steel tank that afternoon to try out on a shore dive. They had to take some weight out but oddly enough I was weighted heavy still. Anyway I did great other than that.

Then there was some talk of doing a night dive. Usually you’re supposed to swim against current when you’re full of energy and ride a current (drift) back to shore. This particular day, the current was going from shore out to sea strong so our 10 minutes out took 18-20 minutes to get back to shore. The current was strong and you had to work to get back. In doing so, hubby overexerted himself and almost got sick. Once back to the wading pool area he was up and out of the water immediately and almost running to get his gear off.

Dan, Doug, Grady, and Rachele were still in for a night dive. Jared and hubby both declined. Karen and I were not sure and could go either way. Hubby wanted me to do the night dive so I could get my night dive certification. I was supposed to get it last summer but I was so sick I couldn’t dive and wound up at Urgent Care so he wanted me to do the night dive here to get certified. Sadly it didn’t happen. Karen went up with Jared after the shore dive and I just opted out of doing the night dive. Karen and I were going to do it together but instead… we went to town to eat and walk around/explore Cozumel.

This picture was of the sunset taken by one of our night divers. I have my version of this same sunset in another post! They are standing in the “wading” pool and between those 2 rocks is a lower wall and that dumps you out in to about 20 feet down. It’s a really cool set up! 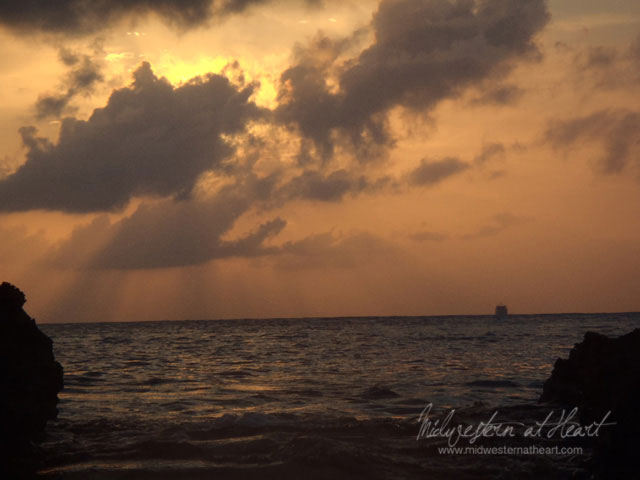 So the cool thing about a night dive is you get to see creatures you may not see during the day or won’t see quite like you would during the day, one being an octopus. I guess they were getting him to “ink.” I’m not real savvy on Octopus so I don’t quite know what that means but it’s really cool! 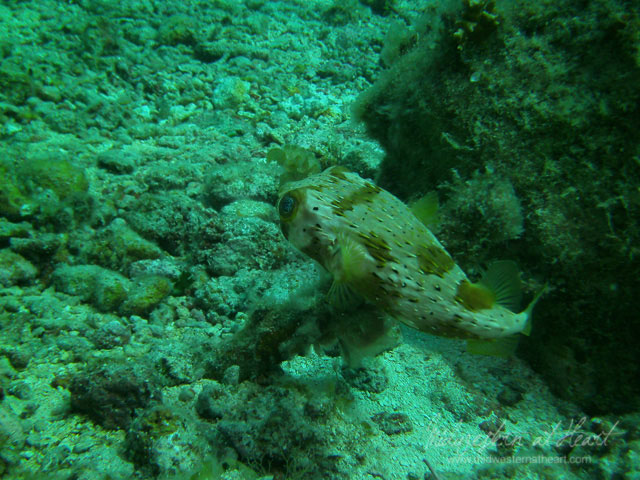 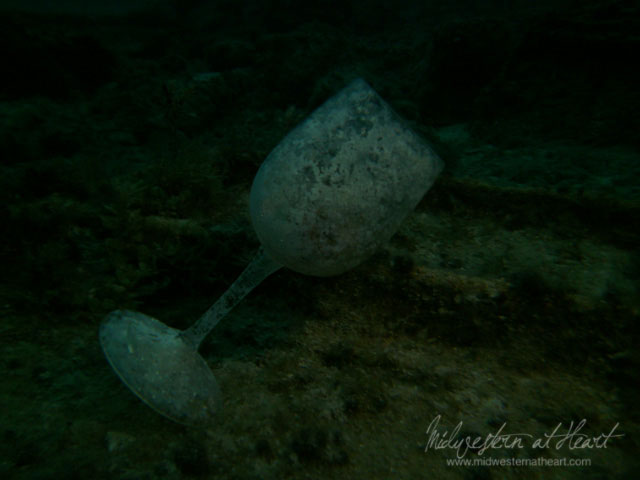