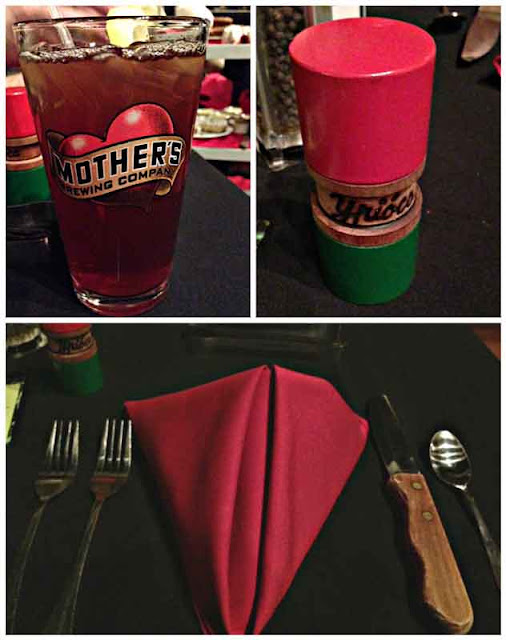 First Course:
House Baked Cheese Bread called Pao de Queijo and choice of Baked Potato Chowder with Corn or Traditional Black Bean Beef and Vegetable Soup served with complimentary Crispy California Roll and Roasted Spinach and Smoked Cheddar Dip.
We weren’t given the option of the soup we wanted, they just gave us the Traditional Black Bean Beef and Vegetable Soup.  It had a really nice flavor.  I didn’t eat a whole lot because I didn’t want to fill up on it, and well, I’m not crazy about beans, so I definitely steered clear of them :).  The Cheese dip and chips – OMG!  The chips were nice and crispy and tasted fresh, just the way I like them.  The Cheese dip was a slight on the bland side in my opinion, however the spinach took up some of that slack and it still was REALLY good. The California Rolls had some crispy bits on top that just added to the exquisite flavor.  And the rolls.  Oh the rolls (and just fyi, they’re gluten free!!).  One of my weaknesses is bread and the cheese hidden inside the bread was fantastic!
They asked if you wanted seconds of any of the first course.  Hubby got more of the California Rolls.  I almost hated to do that though because I was scared to fill up on first courses. 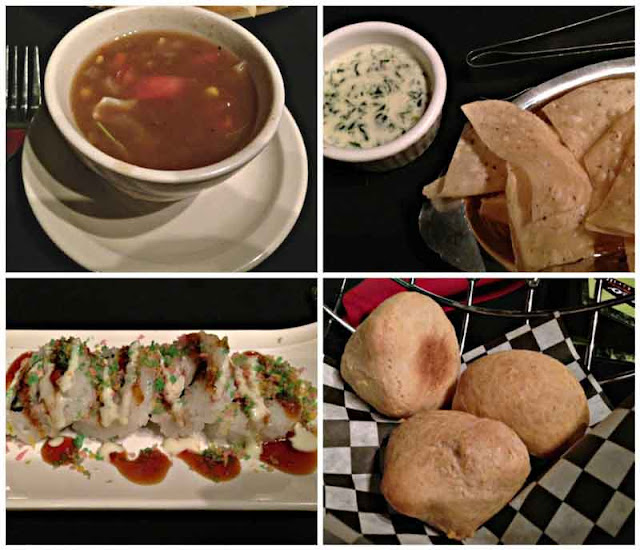 Once you have had your starters, then it’s time to head for your first of unlimited trips to the salad bar.  I only went once 🙂 so did hubby.  But there are around 30 different sides to choose from including, shrimp, pasta salads, regular salad, clams, etc.  I can’t even begin to tell you everything that was up there.  The sides I chose were ok, they didn’t scream outstanding to me, but they were good.  I didn’t finish my plate though (left). 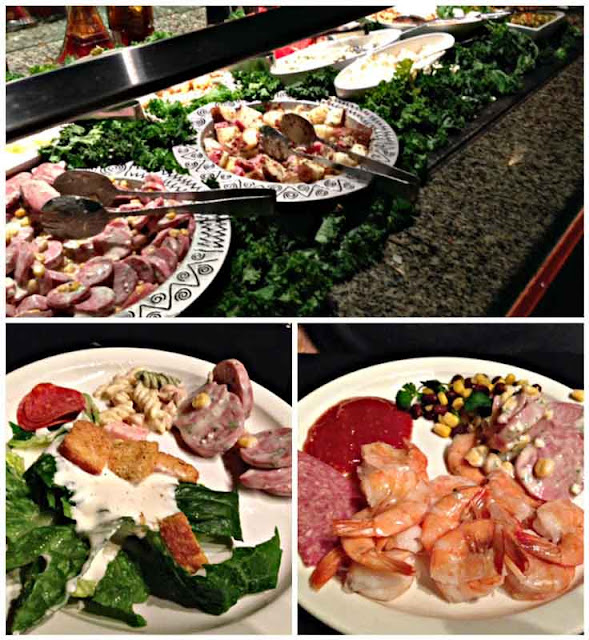 Once the waiter saw we were ready for our main course, he brought us Sweet Potato Fries and Parmesan potato bites.  Plus they brought us Brazilian barbeque sauce and a Chimichurri sauce.  The potatoes were good, but I’m not huge on potatoes cooked like that.  The potato bites were good, especially dipped in the barbeque sauce though :).  The Sweet Potato fries were very good too.  I loved the Chimichurri sauce!

Main Course time!!  They bring around the meats!
Meats:
Then comes the parade of meats.
(line 1)  The first one is a Rump Roast – mine was cold, hubby got the grissly portion.  Then we got fried bananas.  Have you ever had a fried banana?  They retain their heat VERY well so it burned my mouth, otherwise very good.  The next is a KC Strip Steak.  It was really good.
(line 2)  Was a fried chicken.  I can’t find it on the list but holy cow, I could have eaten like 50 of these.  It had a Teriyaki glaze on it.  Superb!  Then we had a Parmesan Filet.  Yum!  And I even tried the Sea Bass.  Ok I could have probably had more of that too, what’s wrong with me, I don’t like fish :).
(line 3)  Fried Shrimp.  YUM!  Yeah I’m a sucker anymore for shrimp as long as they aren’t boiled.  And this was fabulous shrimp!  Then Chicken wrapped in bacon.  By this point I was getting sooooo full but so wanted to eat more.  This was fabulous too.  And last but not least (of what I took pictures of anyway) was the pork.  The pork had a yummy glaze on it and it was sooo good. 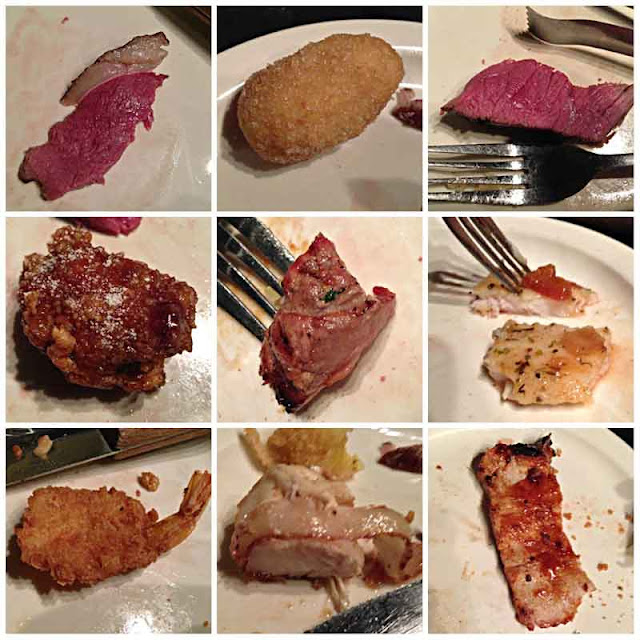 We also tried the pineapple, apparently I didn’t get a picture of it.  It was ok but not what I expected.  We passed on the Horseradish Sirloin, well I’m not sure why.  We also passed on the beef sausage as I’m not real crazy about sausage cooked that way.  Shame on me, I should have tried it all!

My only complaint about any of the meat, is some of it was a little on the cold side.  I like a nice hot steak.  It really didn’t take away from the flavor or make me want to eat less and I so know why there was cooler meat – heck I’d cool off being carried around as well :).

Now prior to coming here, hubby read the reviews and we found a hilarious review some gal left on yelp about the dessert guy.  I won’t share it here, but it was humorous.  I’d just like to state we didn’t experience a pushy dessert gal.  In fact, she was at the table next to us talking to them and I heard Tiramisu Cheesecake.  Oy I was so stuffed but anytime anyone says Tiramisu, I’m kind of sold.  So she came to us next.

You cannot go wrong with this dessert!  Hubby and I got one to share.  It had great flavor, the presentation was nice, everything about it was fabulous!  Yeah, we’re a sucker for Tiramisu, then add cheesecake and well, you’ve got it covered. So would we go here again?  You betcha!  We even called my mom on our way out of the parking lot and said, boy have we got a place to bring you and dad!
Happy day, enjoy!