First thing Monday morning we were headed on our way to Cozumel México. To say we were excited would be an understatement statement. Hubby, Karen, and I neither one slept much the night before. Hubby was excited, I couldn’t get comfortable, Karen was kept awake by the snoring, and Jared said he didn’t sleep much either. Maybe we should have just turned on the tv and had a camp out. lol.

So when you’re going on a destination Scuba diving trip, it is best to take your own BC, your own regulator, your own mask, your own fins, your own dive computer, and your own wet suit. And that’s all fine and dandy but…… you have to do a checked bag to get that all there too. Currently with American Airlines, 50 pounds is $25. If you’re over 50 lbs…. it jumps to $100. That’s definitely a reason not to go over. You’d be better off putting in 2 checked bags because a second bag takes the price up to $40. We had our weights down to 49.something lbs. Yup, we were pushing that limit but we made it! Whew! Then we each had a carry on and a backpack (personal item).

Now when you’re traveling with all your dive gear, make sure you carry on your regulator, your mask, and your dive computer. Also if you take an underwater camera, carry that on too. Hubby’s BC is heavier than mine, and that is without weights in it. So he had to put some of his stuff in my bag to make sure we were both under weight. We both took a 1 1/2 mil wetsuit. That was totally enough for diving in the ocean… down there anyway. In fact I dove without a wet suit once and so did he. I just had a long sleeved rash guard on with my swimsuit.

Anyway…. back to traveling down there. Checking in was easy. Note: carrying on regulators/dive computers/etc sometimes causes bag searches. Hubby’s got searched. Deb said hers usually does but they got by without being checked. 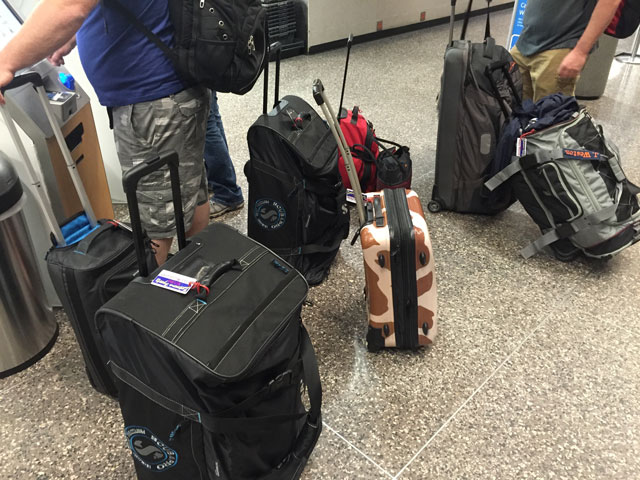 Hubby and I have TSA Pre-check so we went right through. You don’t have to pull out laptops, you don’t have to take your shoes off, you don’t have to take jackets off… stuff like that. Then we went and waited on our crew to come through. Once they got through, Doug found a Starbucks so I ran and got some too. Yup, because of that I was one of the first through but then everyone wound up waiting on me. haha. That wasn’t too big of a deal though because we have to be there 2 hours before anyway. We had time to kill. 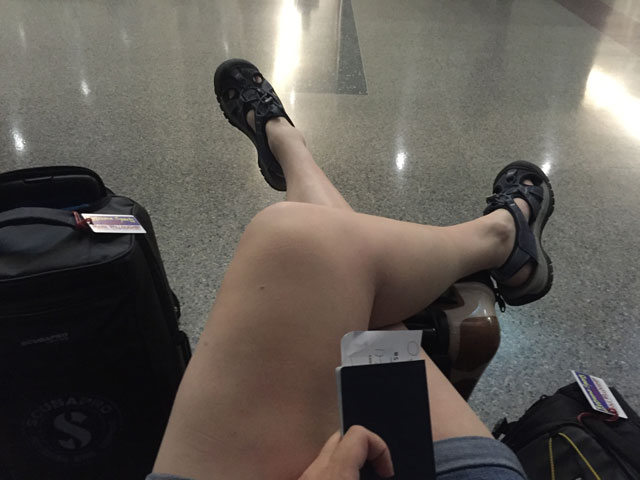 Our flight showed on time while waiting at the Tulsa airport. Turns out due to storms in and around Dallas we were delayed a bit. Not bad though. We headed off to Dallas in no time. Once we got to Dallas we had to grab a bite to eat and then wait for our flight to Cozumel. A flight from Dallas to Coz is just over 3 hours. Definitely no bad! 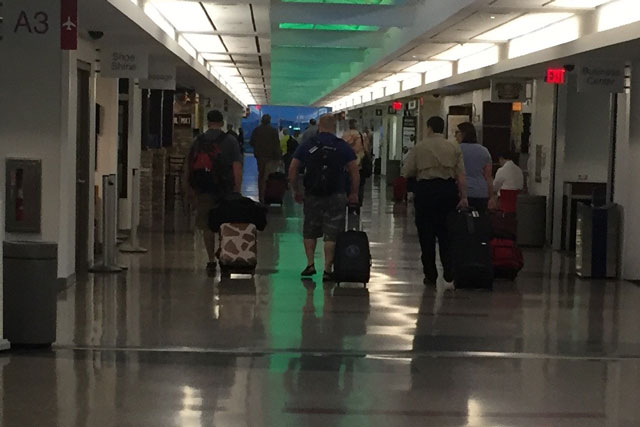 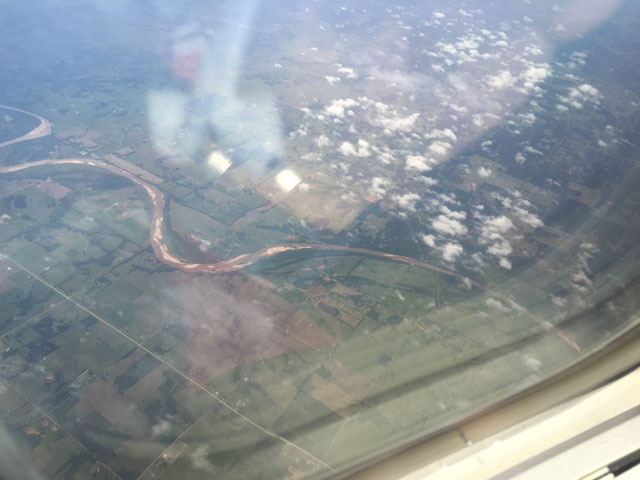 Hubby works for cloud services… so we took this picture and he sent it to his co-workers and said he didn’t see anything in the cloud except this wing. This was what was in the cloud. 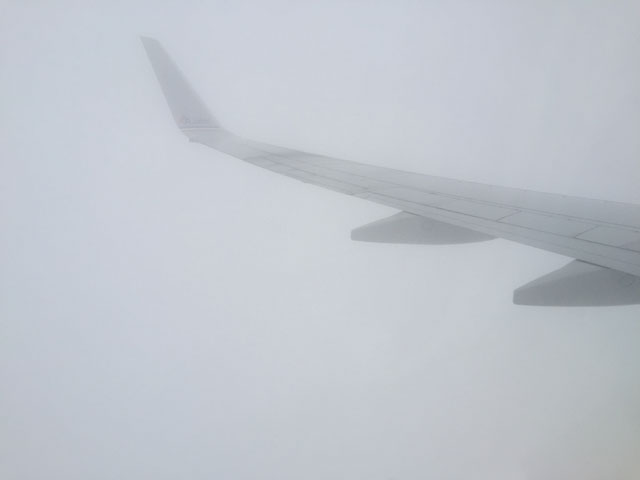 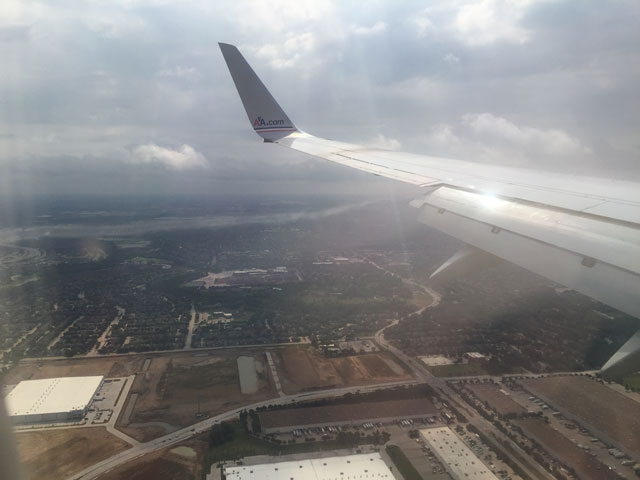 Our flight from Dallas to Coz was uneventful. There were also like 82 open seats or something like that. They had the heaters turned up so in our group, those who got a middle seat (3 on each side) apparently were sweating pretty bad. I had an aisle seat so I was good, other than I prefer window seats. 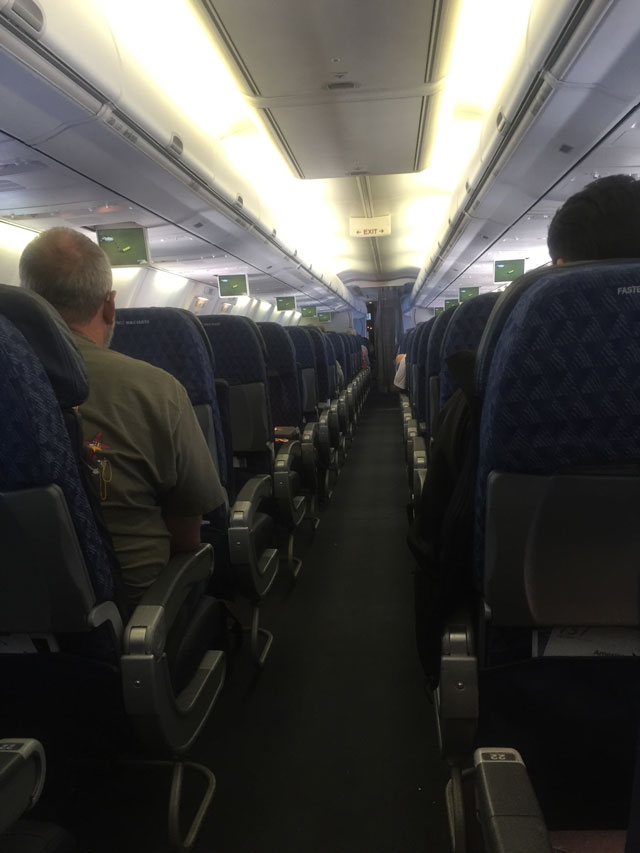 The airport in Cozumel was totally different than airports back home. You exited via jet stairs. And the humidity hit like bam. We have humidity in Missouri which some people find hard to believe, so this felt like July in Missouri. It was great. 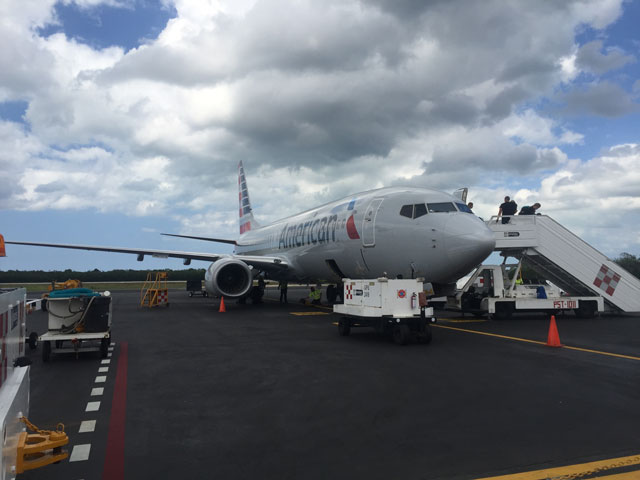 We made it through security, although Carlene got in trouble…. she got an apple at the Tulsa airport, put it in her bag and forgot. The dog in Coz found it and she got a no no. I’m not sure anything really happens other than they take it and write it down…. Oops. So if you find yourself in a situation like that, don’t forget to get the fresh fruit out of your bag!

We got a van to carry us all to the hotel. Grady told them to take us the scenic route since Hubby and I had never been. I was sooooooo excited! Once we got checked into the hotel, then it was off to do a check-out dive from the shore. But as they say…..
And then there was more…….

Tornado Warning
Christmas in August (at least for Karen and me!)
A Week in Southern Oklahoma - Part 1
My New England Friends Be Careful! {and a recipe}