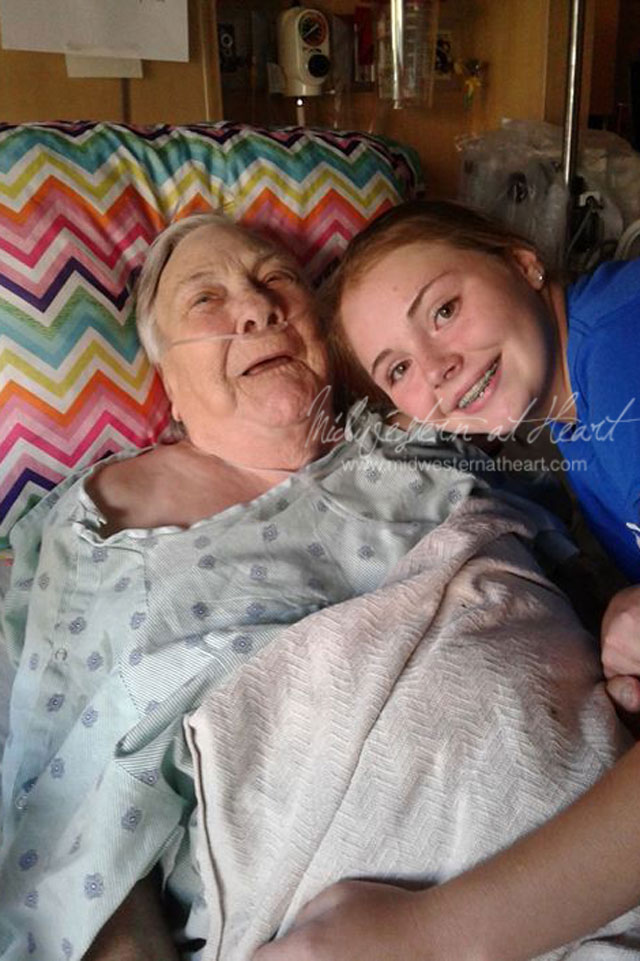 My husband’s grandma is in the hospital. I don’t know what to ask for in the way of prayers. Unfortunately I’m not sure she’ll leave the hospital, although they talked like she might today sometime. She went in on Friday. After we got out of the hayfield we went to see her. She didn’t have a clue who we were or really even that we were there. I heard that they have her on morphine and that hospice (who has been at her house) had her on 3x the amount of a person in pain… I guess they’re trying to keep her comfortable?

We were there Saturday evening to check on her and they verified that she had a blood clot in her leg. She was more lucid while we were there and was hitting on the male nurse even. Then when my father-in-law came in and we were telling him she was hitting on the nurse, she blamed me. I took one for the team. Then at one point she said my husband was sitting on a picture. There was a picture on the wall and he was apparently sitting on it. We accused him of being the elf on the shelf. And finally she kept asking us why we didn’t bring our niece (not our daughter….). So she was more lucid, but still not totally with it. I guess she thought we were my sister in law and brother in law?

Between being in the hayfield yesterday we ran in again to check on her. She was totally out of it while we were there. Tbug’s mom took her over yesterday evening. She didn’t want to go and asked me if I thought that was a bad thing. Truthfully, while she may have regretted it, I don’t think it’s totally a bad thing either. Her mom and I think even her step-dad are nurses so they’re around things like this (although he works for an eye care place now… again I think). Her mom is an ER nurse. She is exposed to tragedies that come through there quite often.

I told Tbug it was kind of six of one half a dozen the other. I know exactly where she was coming from. She’s 14 years old and this is real life stuff. Yes, it is okay to expose her to this and if she didn’t go she may have always regretted it, but at the same time… I just hope this isn’t the last memory she has and that’s all she focuses on instead of all the good times. Ya know. By the way, if you can’t figure it out, she went. I’m not sure if she chose to or if she was told to… I wasn’t there. I just know she didn’t want to via text. I did get one from her later that said she was glad she went. I just reminded her not to remember grandma this way but remember her for all the good times.

As of Saturday night they were going to put her on some medicine to break up the blood clot in her knee, then late Saturday evening or first thing Sunday morning part of it broke away (whether on its own or with medicine I don’t know) and wound up in her lung. Not a good thing.