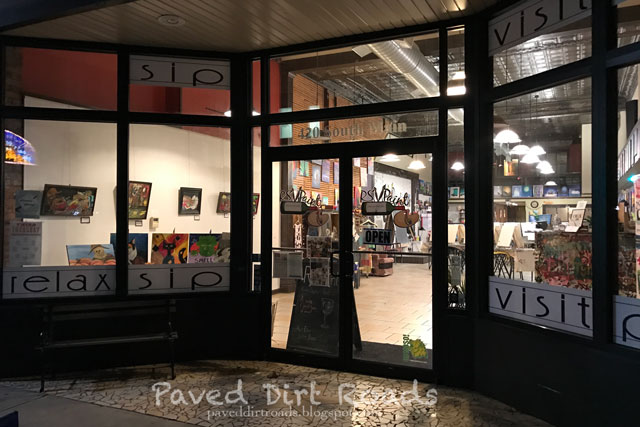 A blog that I’ve followed for years, Jill’s World, up in Canada started discussing how she and her friends were attending a paint night. I wondered what that was. Basically, she and a group of friends go to a place, learn to paint, and have fun. How awesome is that I thought. I figured something like that had to exist here in Southwest Missouri, right? I mean we’re not always the most cultural people but….

Not long after I read one of Jill’s posts, my friend Danielle asked if I’d be interested in doing that. I said sure but I’m not artistic at all! That’s no joke! Well nothing came about from that conversation. I didn’t know where to find it and she never said anything about it again so the dream kind of died… until…

My friend Jody posted something on Facebook one day that had something to do with a paint night. I shot her a message and asked if she knew anything about it and had done it. She said no, but she wanted to, so again, we started pursuing it, but this time she knew of a place in Joplin called RSV Paint.

So basically you go on line, sign up for a class, show up, and it’s a date! Now it stands for:

Relax. They say don’t get too uptight about your painting. Easier said than done….

Sip. Yes, you can sip wine, alcohol, do a shot, whatever. If you bring your own, there is a $5 cork fee for a bottle of wine or every 6 pack of beer you bring.

Visit. You’re amongst friends. We even had our instructor visiting with us about Kayaking, Canoeing, Fishing, SCUBA diving, and Riding horses.

and lastly Paint. Because well that’s the reason you’re there…. 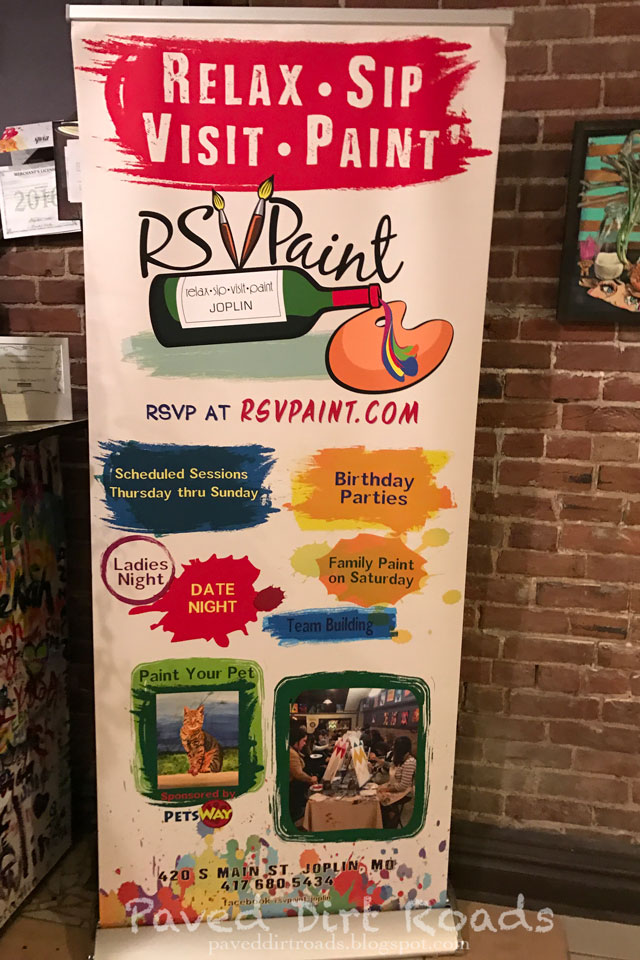 The classroom is set up where the instructor is at front instructing you on where to paint the next thing. I’ll admit, I was a bit intimidated at first, but like I stated above, I don’t really have artistic abilities. I’ve always wanted them, just lacked them. 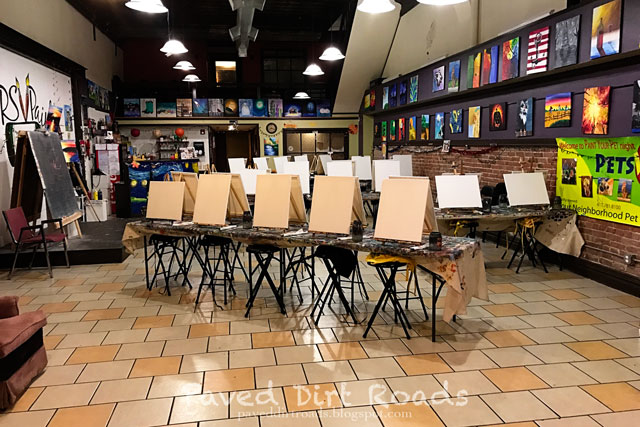 Jody and I happened to be the only 2 students in class that night so we got VIP attention :). It was kind of fun, but I definitely want to attend when there are more people. One thing you note when you’re signing up is who you’d like to sit by, whether it be a party you’re with or the one person you’re with. 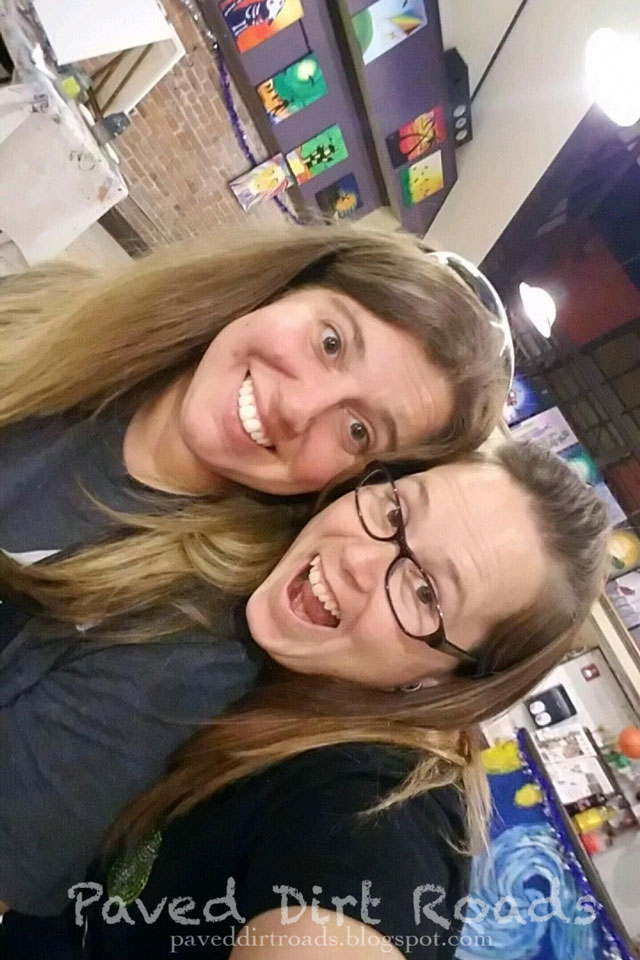 There is a calendar that shows all the different pictures you can come learn to paint. This wasn’t our initial first thought, but I had to back out on the first date we chose because I forgot I had prior commitments so we went on this night which was one of our second choices. We had a list of like 5 or 6 we liked/wanted to do so that hopefully one date would work with both of our schedules. Normally my schedule is so flexible it’s sad, but I just so happened to have plans the one night we chose initially. Isn’t that how it always works? 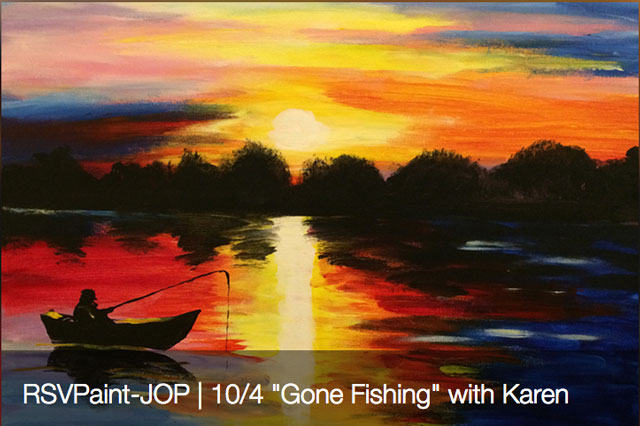 Karen was our instructor. She walked us through how to start and where to go next. She kept saying that art is to be seen from a distance so if we thought we didn’t like it, step back and reassess. At this point I accidentally mixed blue and orange which are complimentary colors but make a yuck brown color when mixed together and my picture was fairly dark. I was worried. It worked out though, we fixed it all. 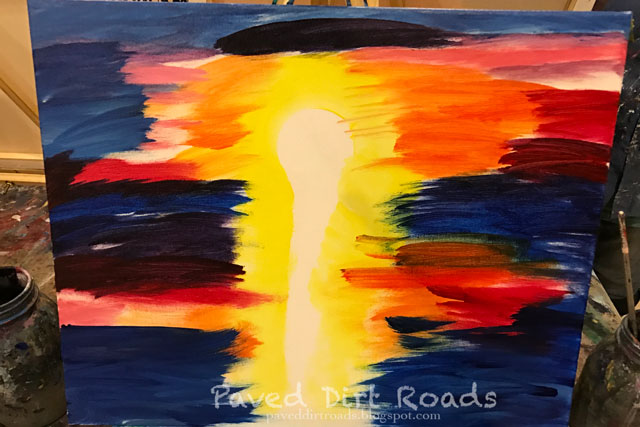 Then it was time to add the trees into the horizon. We lightened up a spot for my fisherman dude and fixed that yucky brown. And yes I said fisherman dude :). Just keeping it real :). 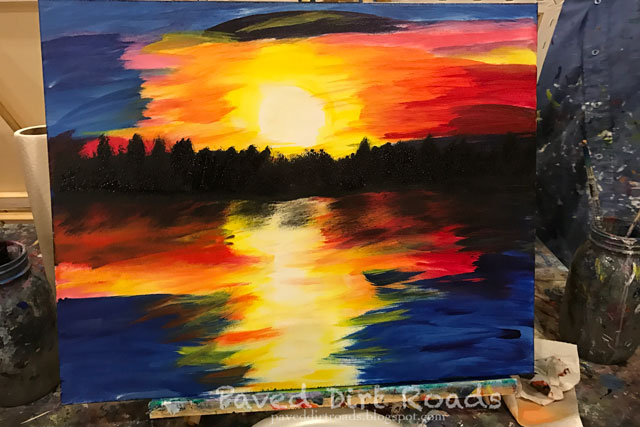 Finally, we added in the Fisherman. I still think where we put him in my picture is a bit dark, but it’s supposed to be sunset and he’s a silhouette so I think it works. I have absolutely no artistic abilities. I can barely draw a stick figure and I painted this. I kept making a reference to Girl Meets World and Riley’s Purple cat that I might be able to draw that. If you don’t know what that is, google it. You’ll be amazed :). 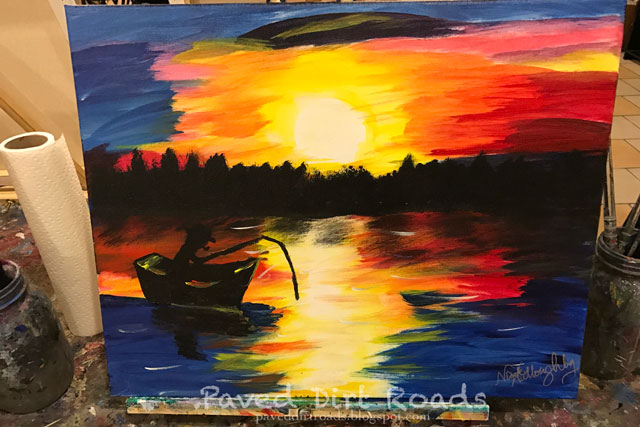 Karen took pictures of us throughout the night for the Facebook page but she also took finished pictures. 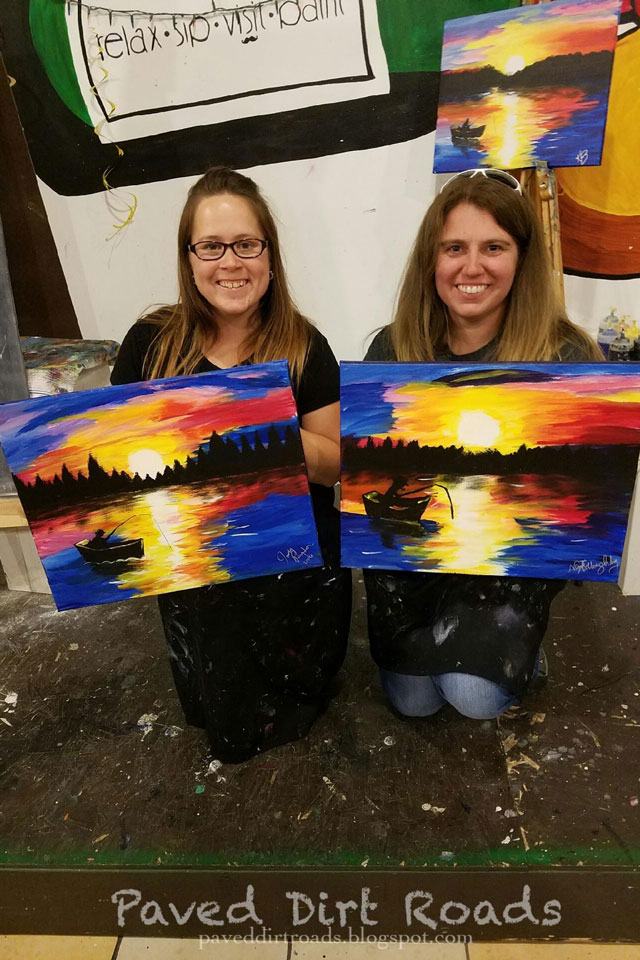 And one last photo with a goofy face. This is one to make my mother happy. She just loves with I stick my tongue out in pictures… Whatever… it just happens sometimes. And this was my goofy face :). 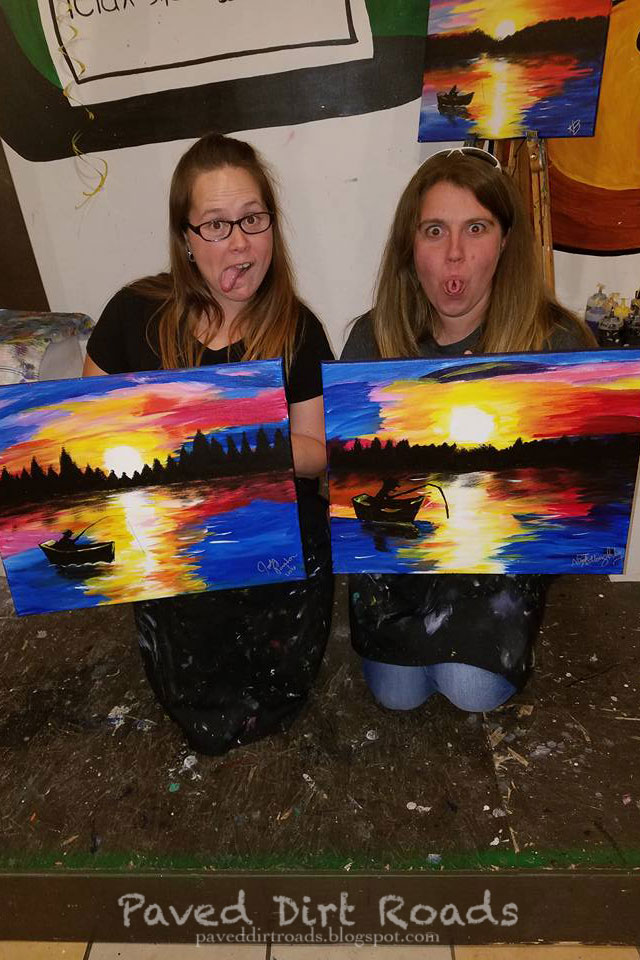 I had so much fun, now I want to go again and learn to paint even more.