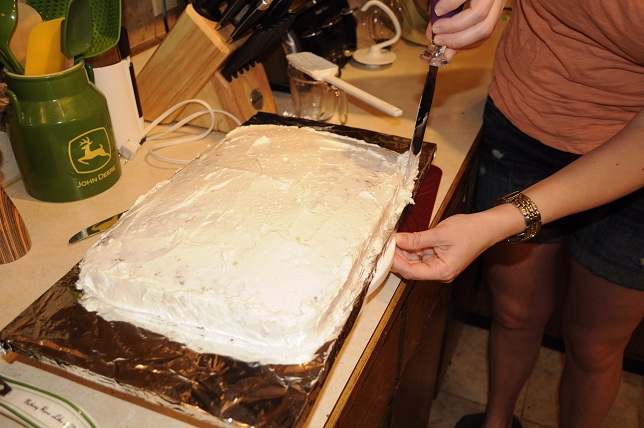 So after yesterday’s debacle, I told you about… I was going to make a from-scratch cake.  The recipe I had called for 1 1/2 sticks of butter at room temperature.  I let 2 sticks come to room temp, took them out of the package and threw them in the mixer, and that’s when I noticed the whole cake flour bit.

Shoot!  Now, what was I going to do with the butter?

Then I remembered a while back on Tasty Kitchen seeing a weird icing recipe using flour and butter and milk.  So I went to googling to see what all it really did require.  When I saw it called for 2 sticks of butter, I knew I was making this icing recipe.

Now the last time I did something like this {used an unfamiliar icing recipe} it turned out horribly, but I was going to take a chance.

I know it sounds weird but add flour to milk and let it thicken to a brownie consistency.

Just keep whisking until it does.

Regular sugar, not powdered is added to the butter.

and mixed together until it is no longer gritty. mmmm sugar and butter!

Then this needs to cool. It said if you were in a time crunch stick it in an ice bath in your sink. It needs to be completely cool before the next step (adding the vanilla). Yeah, I wasn’t quite there, so I had funny little clumps every so often. Oh well!

Then you add that mixture to the butter mixture. Whisk until it was the consistency of whipped cream.

I had no idea if it would be very good decorating icing even, but at that point, I really didn’t care. It worked and surprisingly it was good. Definitely not too sweet like some icings can be.

“That’s the Best Frosting I’ve Ever Had”

Bake your favorite chocolate cake and let it cool.

In a small saucepan, whisk flour into milk and heat, stirring constantly, until it thickens. You want it to be very thick, thicker than cake mix, more like a brownie mix is. Remove from heat and let it cool to room temperature. (If I’m in a hurry, I place the saucepan over ice in the sink for about 10 minutes or so until the mixture cools.) It must be completely cool before you use it in the next step. Stir in vanilla.
While the mixture is cooling, cream the butter and sugar together until light and fluffy. You don’t want any sugar graininess left. Then add the completely cooled milk/flour/vanilla mixture and beat the living daylights out of it. If it looks separated, you haven’t beaten it enough! Beat it until it all combines and resembles whipped cream.
Grab a spoon and taste this wonderful goodness. If there is any left after your taste test, spread it on a cooled chocolate cake.
Cut yourself a piece and put it on a pretty plate. Grab a fork and prepare to experience the most divine pairing you can imagine. This frosting on a chocolate cake is to die for. Sure, the recipe sounds strange — it has flour in it — but it’s sublime. Try it, you’ll see. You’ll love it so much you won’t go back.
*****************************************
It was very good, although I think I’ll stick with my normal icing recipe when I can! 🙂