So today is Tbug’s birthday.  9 years OLD as we keep telling her, stressing the Old part.  This is the first year since she’s been in my life that we’ve actually had her on her birthday.  Usually we have to celebrate it early or late.

Now that being said, we actually celebrated with lunch and presents yesterday (the 1st) just so she’d have time to play with her presents.  On Christmas she got her presents at noonish and had to go home at 6, not much time to play with fun new toys!  So we thought even though she’d be with us all day today, we’d give her the day to actually get to try out her new things :).

When we picked her up on Saturday night I can’t quite remember what I said but I was giving her grief about not having time or something to get her birthday presents.  Somewhat easy to “pull off” since her birthday is 8 days after Christmas.  Anyway she told me, “That’s ok mom (yes she calls me mom), my swingset (which she got for Christmas) is enough.”

That is a completely different kid than the first Christmas/Birthday I spent with her where when Santa presents came she looked at me after opening all and said, “Is that it?”  Boy that’ll kill your ego… lol, but we’re not focusing on the past, we’re looking forward to the present which is here and now.

So she went to sit on the floor and faced the tv (in the background) so I made my way over that direction for her to turn around and face all the seats so I had to work my way back to this side so I could get pictures.  And with your birthday so close to Christmas, you still get Christmas decorations in all the pictures… oh well :). 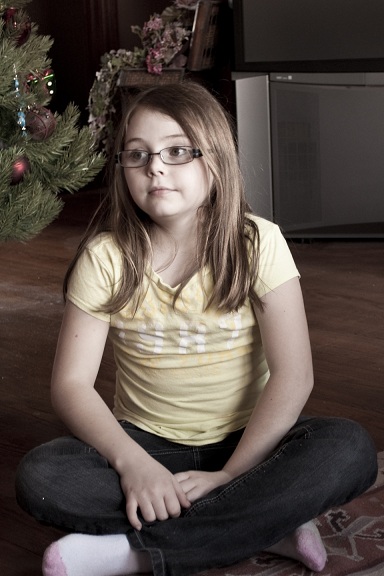 Finally time for the first present.  This is from grandma & grandpa. 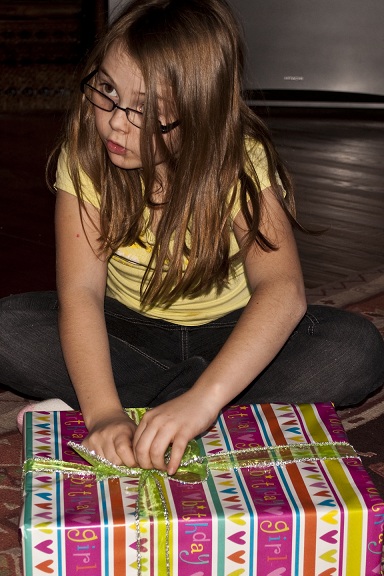 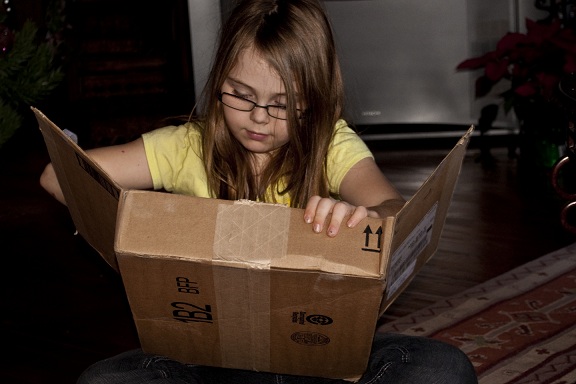 For Christmas she got a Williams Sonoma Kids cookbook so we figured we’d get her a kids knife and give her lessons on how to use it.  The best part, the kids knife comes with a cut proof glove for her left hand (since the knife will be in the right).  Score!  And the WS cookbook has an entire section to teach kids how to use knives safely.  And don’t worry, I’m not turning her lose with it! 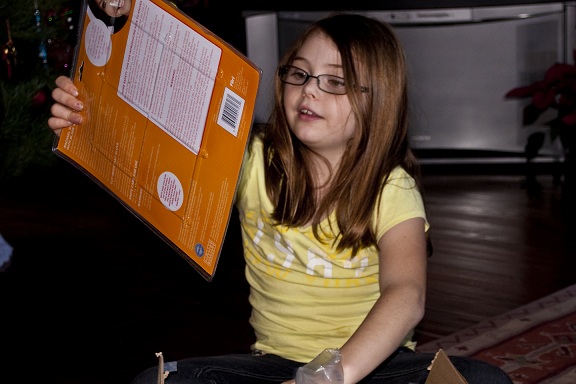 Next up, a present from dad & mom. 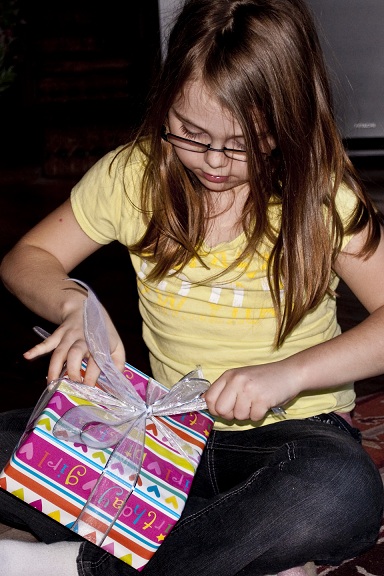 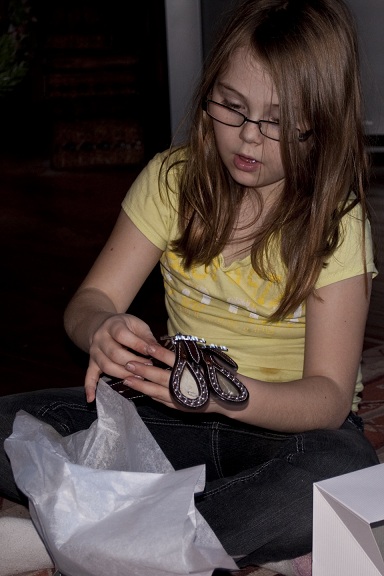 Now a bit of a story to go along with her “big” birthday {and Christmas} presents.  Last year when we celebrated her birthday, she got a trampoline.  You can’t really carry a trampoline to a restaurant so we took a picture and wrapped it up.  The look on her face to begin with was priceless until we explained.  So earlier this spring she told my mom she hoped that she would unwrap a present of a swing set for her birthday this next year.  Well I had already told PC that I wanted to get her a swing set for her birthday so I felt like I was on the right track!

So all summer long she complained about outgrowing her bike and wanting a new one.  She still had a little “ride” left in the current one so I told PC that’d be a good present, even though weather conditions kind of suck for that (Christmas in December & Birthday in January).  So around Thanksgiving we had a few extra days with her.  His mom and my mom helped us out in watching her, and while she was with my mom she said she figured that we were going to get her a bike for Christmas since we kept saying that all summer long.

When my mom told me this we immediately had to switch gears so she got the swing set for Christmas to throw her off. 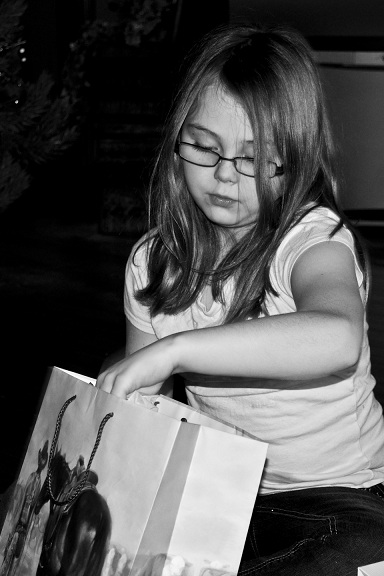 Now being at my parents house, we could have easily just brought the bike in with a bow on it, but come on, where’s the fun in that?  So we gave her a picture of the bike that was downstairs in my parents basement. 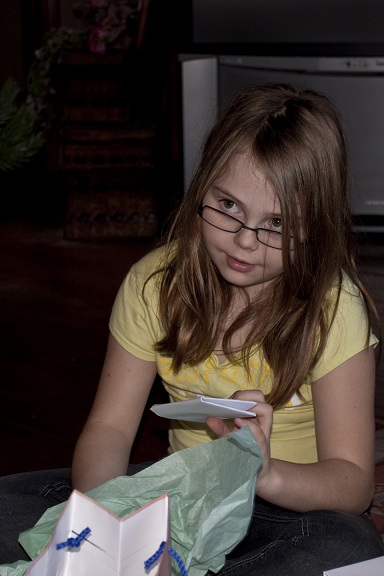 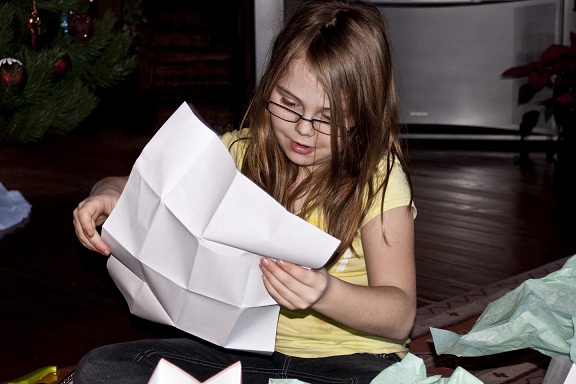 But the best part of the picture was, since the bike was from both my parents and us, we had my mom take a picture of grandpa sitting on the bike and that’s what she got to unwrap, a picture of my dad (grandpa) sitting on her bike. 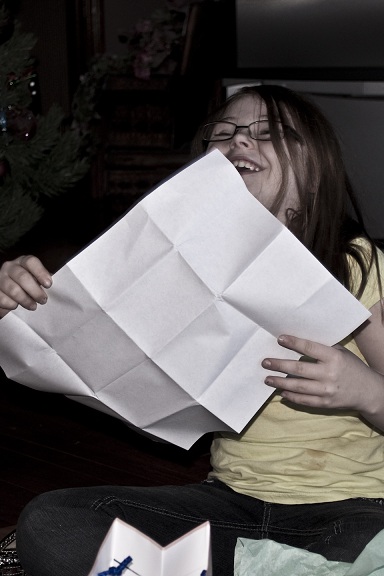 Then grandpa went and got it out of the basement while dad and I put her straps on her spurs, that she just so happened to bring along with her. 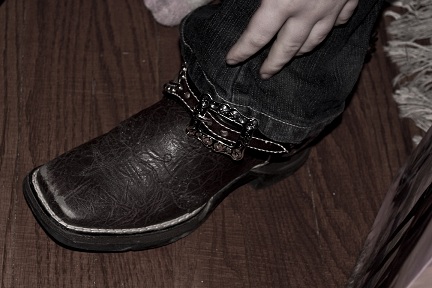 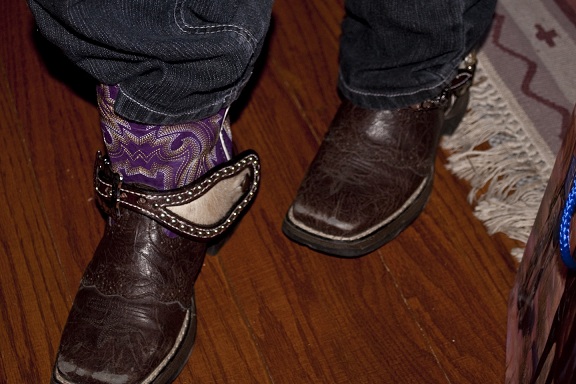 So just about the time we got the straps on and she put her boots back on, grandpa is sitting outside the door {my parents have French doors} on her bike.  She grabbed her jacket and took off outside to get her bike, but my dad jumped off the bike and took off running with it across the back deck.  It was hilarious and cute.  I wish y’all could have been there and seen it!  It was great!

Anyway Happy Birthday to my very sweet {step}daughter.  9 really isn’t that old, but I keep telling her it is :).

p.s.  And just as a funny side note… we {and when I say we, I mean PC} gives my dad a hard time about being “old”.  It’s just the way they are to each other.  Anyway Tbug has picked up on that a bit and started teasing grandpa about being old.  So, we were driving Saturday night and I really don’t remember what happened or what was said but I made the comment, “If the shoe fits, wear it.”  So then we got off on the conversation of being old and I made the comment I was old.  Tbug blurts out, “You aren’t old, Grandpa is old.”  We told her that wasn’t real nice to say and she said, “Well if the shoe fits, wear it.”  Yes, be careful what you say around the youngans.  Just sayin!

What Tattoos I have and meaning | Blogging 30
Fish City Grill {Rogers, Arkansas}
You have to Dance at Dance Class
Orange Beach, Alabama - Part 4 (the end)