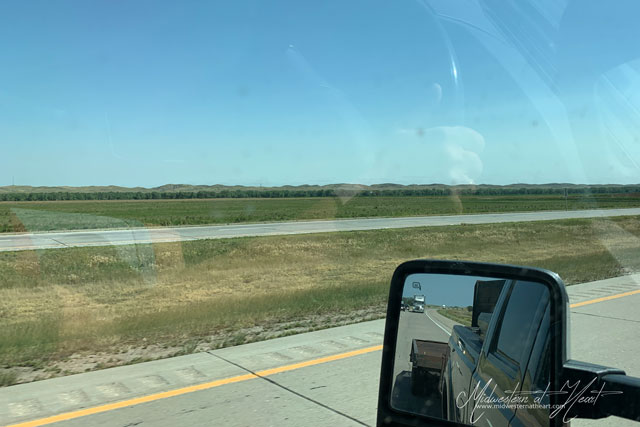 He told me late last week that we might be making a quick trip to Ogallala, NE. I started laughing for 2 reasons. 1) why? and 2) back in college I had to write a paper for a short story class. I took a story my uncle told me and of course embellished it a bit. I didn’t know what my uncle’s hometown was at the time I wrote the paper (just knew he was from Nebraska) so I made the story take place in Ogallala. I’d never been there or really even knew where it was. I just looked at a map, I thought it was a fun name, and chose it.

So when it was confirmed we were headed to Ogallala, we loaded up and off we went.

We borrowed our friend’s gooseneck flatbed to haul this truck home. Hubby got it a few days early so we could rewire the lights and make sure they all worked, etc. Then we hooked up and 9+ hours later, we pulled into Ogallala. We did stop at the zoo in Lincoln, but that’s another story for another day.

I drove that whole trip. I even said I wouldn’t pull the trailer through Kansas City, not that I can’t, I just didn’t really want to, but I did anyway. In fact, I did it through just after morning rush hour traffic so it was still busy. I was raised up if you can’t drive, back, park, etc a trailer, you don’t pull one. I can do it, I just didn’t want to. But I did it anyway. 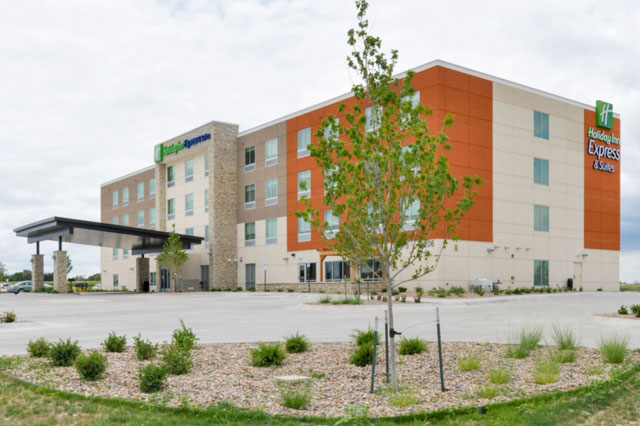 We had plans of staying the night there. It was 9ish hours away. Of course, we were staying the night. Hubby chose the Holiday Inn Express, mainly because they had a pool. An incentive to our sweet little who got to ride in the truck there and back. By the way, she was a trooper through all of this!!

The little loves staying in hotel rooms. With the weirdness of the world right now, she hasn’t gotten to in a long while. So the night before we left, she was having anxiety attacks or so it felt on how to pack, what to pack, did I pack enough. Don’t worry, I was stressing out just as bad.

As I mentioned, we chose the Holiday Inn Express because of the pool. I’m so glad we did too! This particular trip we had a King-sized bed. 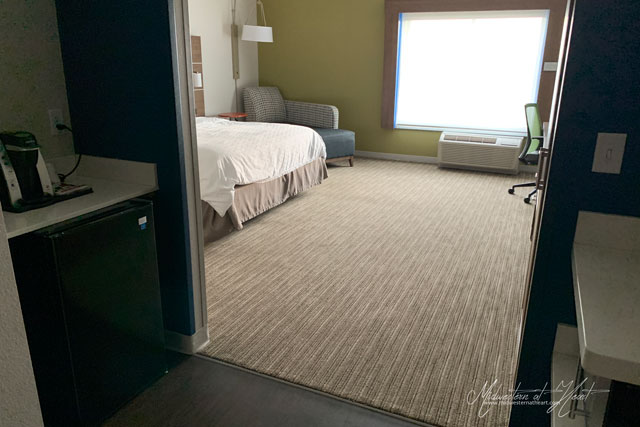 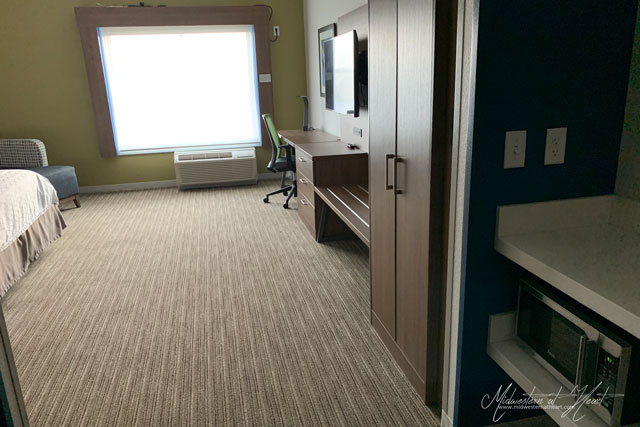 The room was really nice. We were actually in the handicapped room. The shower (I didn’t get a picture) allowed easy access for a wheelchair or at least to get someone moved into the shower. Honestly, I really liked the bathroom set up in this hotel room. We’ve stayed in quite a few hotels through the years and this was a nice setup. 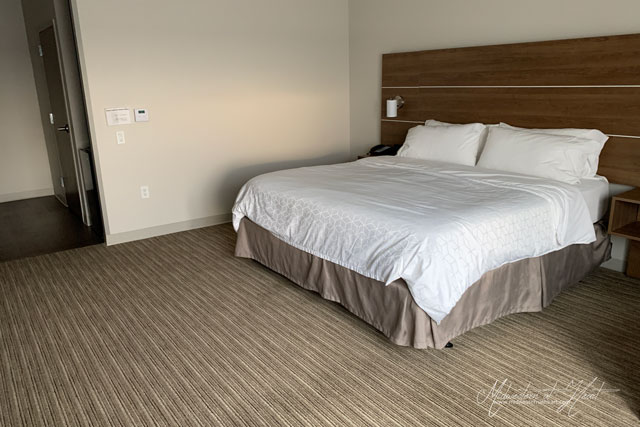 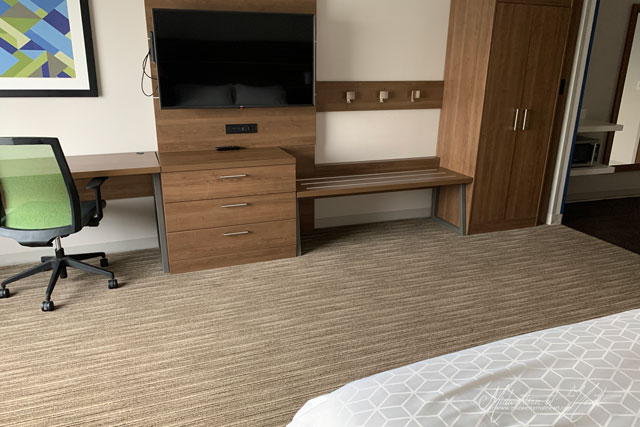 Because of Covid-19, there were restrictions to 10 people in the pool at one time. Normally it is a limit of 38. Yes, I read the signs on the wall. #nerd

We were the only ones in the pool for quite a while, then another couple joined us. They were from Arizona touring around on their motorcycle. 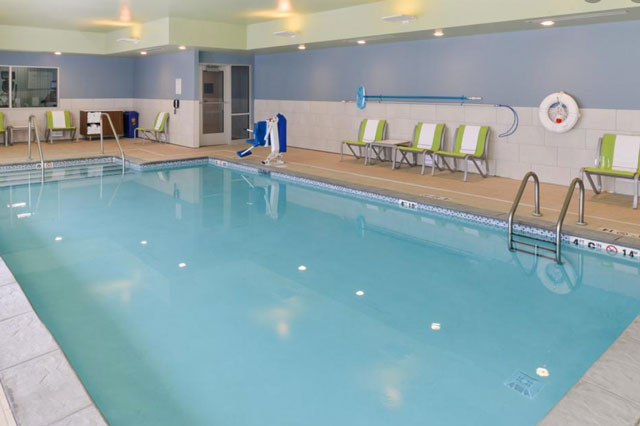 When hubby was checking in, he asked the lady at the front desk for a good option for dinner. Without any hesitation, she suggested Open Range Grill. We started wishing we had brought our ball lock with us to drop the trailer, but since we didn’t, off we went through town dragging the trailer. We figured surely we’d find somewhere to park. We did. They had a huge parking area in the back of the building. Whew! 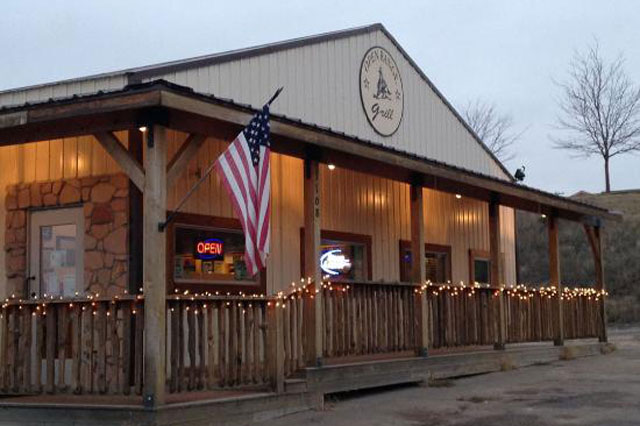 I heard the gal taking orders say that they were closed down for 2 months due to Covid-19. People are truly affected by this, but I never once questioned that.

When you get there, you place your order, then you are seated. I saw that they had Rangy Bull Fries on their menu as a meal. For those that have never heard them called that, think Rocky Mountain (or Ozark Mountain) Oysters… also known as bull nuts. There, I said it :).

Hubby likes them. He’d actually never tried them before dating me though because the thought wasn’t settling well with him. I made him try them and truthfully, I’m not a huge fan. haha. They also had an appetizer of them, so he got some and then “bragged” to one of our friends. 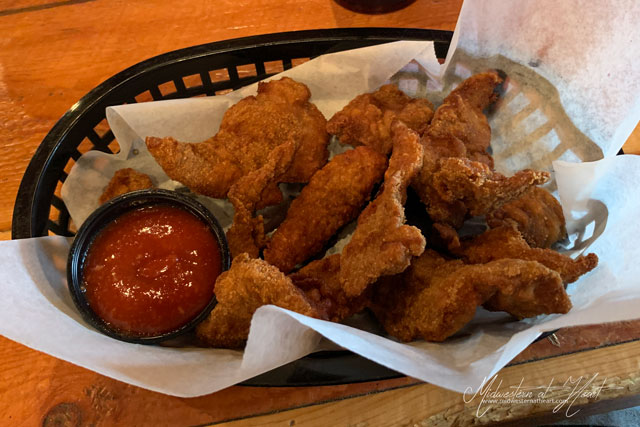 I love jalapeño poppers. We got some of them too. 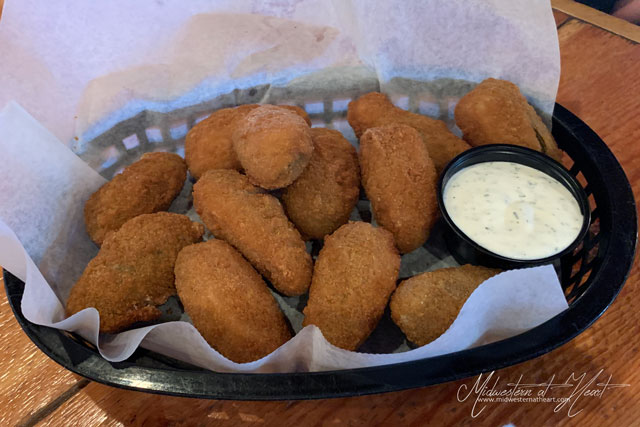 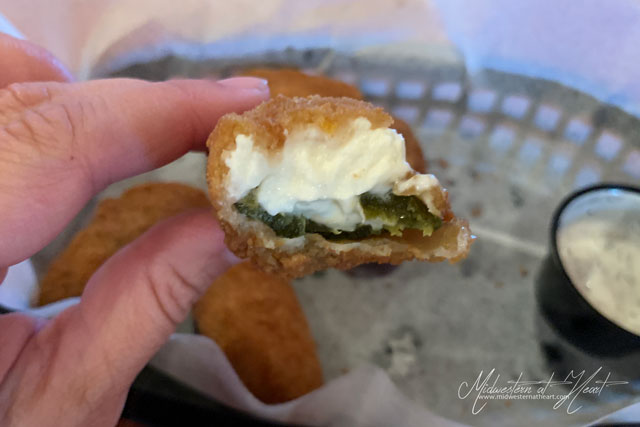 Then it was time for dinner.

Hubby got the Gommorah. It was Bacon, Mushrooms, Grilled Jalapeños, Smoked Cheddar, and a Special Sauce. I wanted that so bad, but I chose to get something different. Then we split them in half and that allowed us to try 2 burgers. Bam, mind blown. haha.

Although really, the difference in mine and his… the cheese, the sauce, and we chose different buns. He went with a jalapeño bun and I went with a pretzel bun. I can’t remember the name of mine, but mine had a chipotle mayo. He went with sweet potato fries and I had a side salad with ranch dressing. Yum! 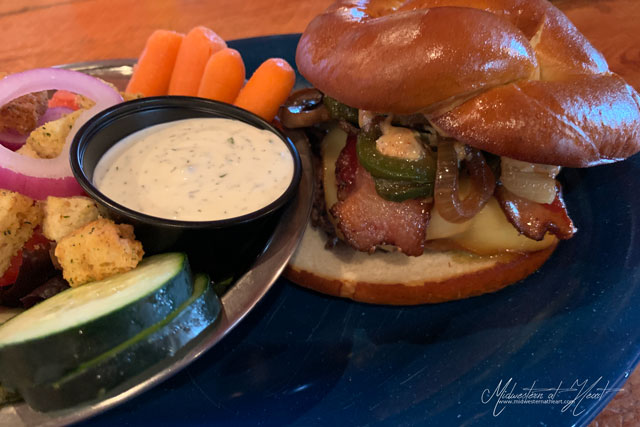 The little went with grilled cheese and french fries. 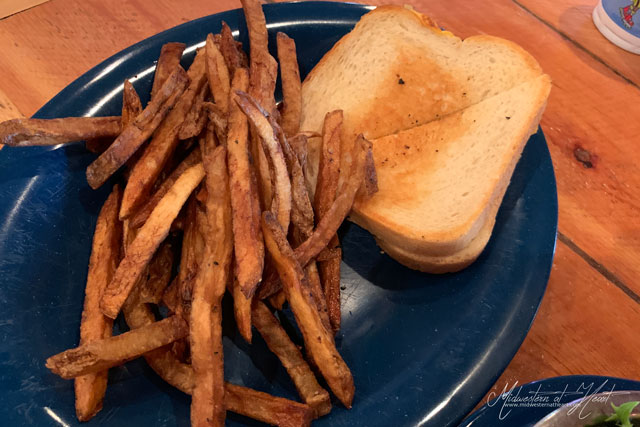 That’s when the fun started

Hubby drove on the way back to the hotel. Just as we pulled into the hotel, something didn’t sound right. He got out to check it out and that’s when we saw this.

So hubby spent the next few hours trying to get it fixed to no avail. Ogallala is in Mountain time zone so it bought us an hour to try and work on this with stores, but nothing. So he set his alarm to get up early and try to get it fixed. 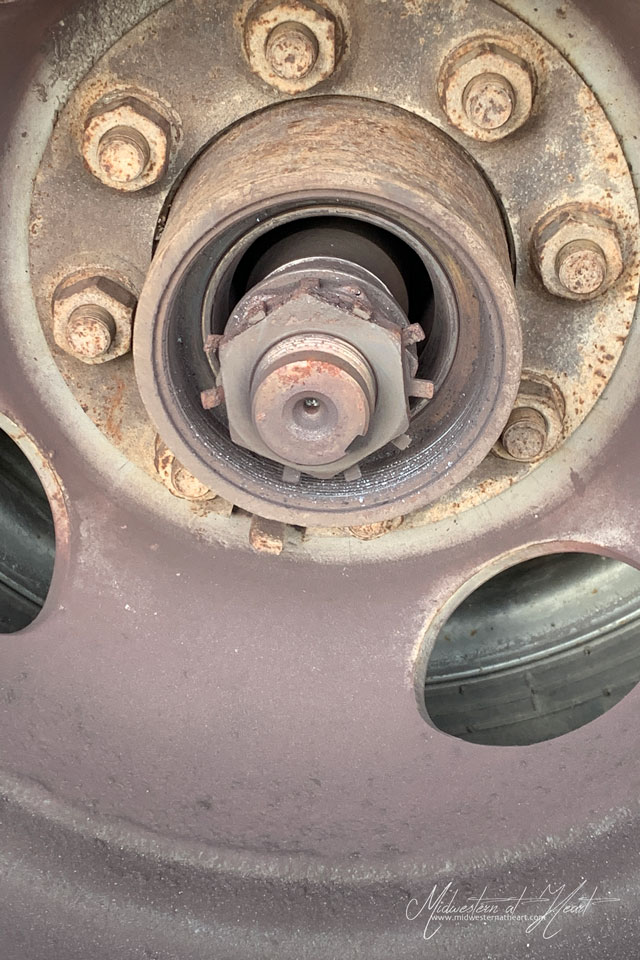 My phone never did update to Mountain time zone and my watch (I have an apple watch) wouldn’t even hold a charge and died. I never did know what time it was. Hubby’s phone finally updated to local time. So he had alarms set up. He had plans to meet the guy to get our “new” truck at 6:30. He was there, but we couldn’t load it on the trailer, so he came back to the hotel. Waited for a bit and then went to the trailer store in town. They weren’t able to help us. They sent us on down the road to North Platte. Luckily that is east of there and we had to head east.

There was another guy who was there having issues with his trailer too. He was from California, loaded up a tractor, and drove to Oklahoma. How he came to Nebraska I’m still not sure… I’m not sure which part of CA he was from. But I guess he got such a deal on whatever he was doing that it was worth the drive to Oklahoma. He was having trailer issues too. It just wasn’t a good day/week/year?? for trailers.

Meanwhile, back at the hotel, we felt like sitting ducks. haha. We couldn’t go anywhere and I’m not sure there was much to do. This coronavirus sucks… but we all knew that so let’s not dwell.

There was a coffee shop right next door so the little and I headed over for coffee and breakfast. 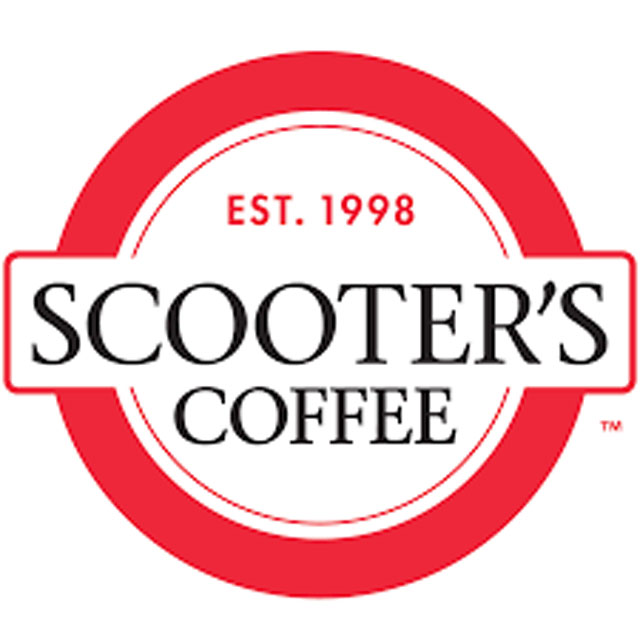 This is the conversation that took place while ordering our coffee…

Me: I need the coffee after the luck we’re having.
Coffee shop guy: I take it you’re not from here.
Me: Nope SW MO. But I’ve always wanted to come to Nebraska.
CSG: why? It’s boring here. All we have is farmland.
Me: Is this where I tell you I have a degree in agriculture? I like it here.
CSG: go to my house. We’re farmers. My brother will talk to you all day about precision agriculture.
Me: if I didn’t have a broken trailer I’m trying to get fixed I’d take you up on that.

He might have walked away laughing at me 🤷‍♀️. At least he had a good laugh for the day and I had good coffee.

This Mocha Frappuccino was one of the best I’ve had. Yum! Scooter’s, please move a branch of your store to Southwest Missouri!! The little accidentally dropped hers in the parking lot on the way back to the hotel, so I had to share mine with her. It was so good I really didn’t want to share. Yes, she likes her “coffee.”

She also got a double chocolate muffin that was out of this world yum! I got to eat half of it. She swapped me half muffin for my frappuccino. And NO, I didn’t initiate that trade. She did. I was going to let her keep the muffin but she was done. And holy yum was it good. 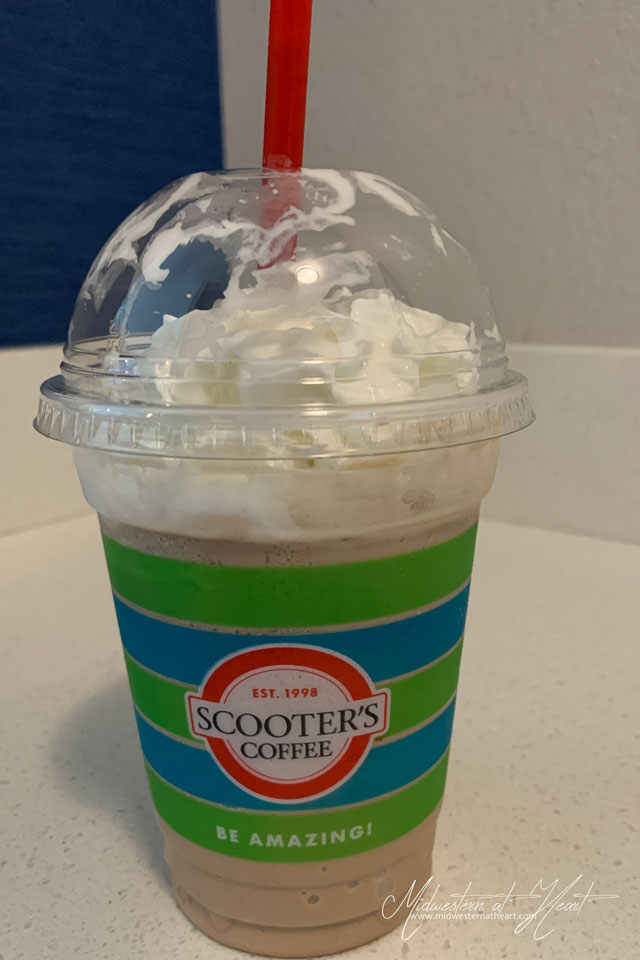 On down the road

They couldn’t help us get the trailer fixed, so we had to chain up the axel and limp it 50 miles East. Hubby drove the “new farm truck” and I drove the truck and trailer to North Platte.

And that my friends is how you spend a week in an afternoon.

At least… at least… we didn’t have the truck loaded down on the trailer and running 75 mph on the interstate home when the trailer broke. That could have ruined the truck, trailer, truck, and possibly us. You just never know.