Today is 9-11. I know where I was on that fateful day 16 years ago. I’ve mentioned it many times here on the ol blog… But I was yelling at my roommate because her alarm was way too darn loud. We had bunk beds and my bed was on top. I hopped off the bed after yelling at her and went off to the bathroom. We had community bathrooms. As I was walking back to my room to go back to sleep, because I didn’t have class until 11 am, I heard Tom Brokaw’s voice. Not something you typically hear in the morning.

I immediately knew something was up. I wandered down the hallway into Jessie’s room, sat down on one of the beds and watched as the second plane hit the second tower. After I picked my jaw up off the floor, I asked her what movie she was watching. It was so life like. She told me this was really happening.

People all around campus were glued to the tv, and those who weren’t were waiting in line at the gas stations scared to death about what was going to happen.

Okay, What Gives with the Title? 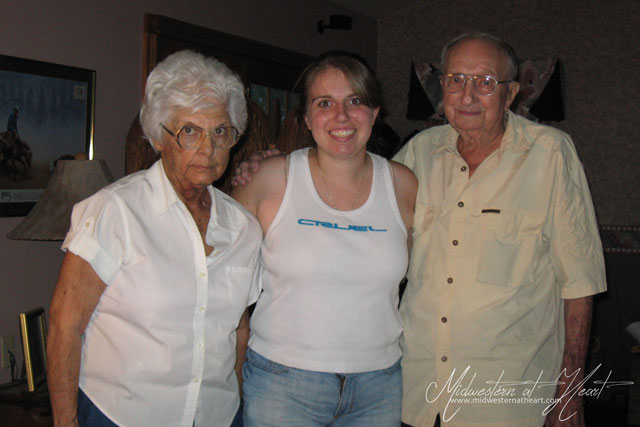 9-11-2007 changed my life. Early in 2007, my grandma was diagnosed with oral cancer. I remember on 9-4-2007, my grandma’s anniversary, she was walking around her house saying, Well this will be my last anniversary. Toward the end, I went over every evening after work. I tried to spend as much time with her as I could.

The week of 9-11-07 I knew something was coming. I couldn’t explain it, but I just knew. That week I went into work early and stayed late on Monday. Tuesday I went in early as well. That Monday, the hospice nurse found my dad’s cell number. She called him and said normally they weren’t supposed to do that, but she knew my mom was in China for work and she didn’t think my grandpa understood the seriousness of everything. I partially think he and grandma didn’t want to bring my mom home without knowing something for sure. The hospice nurse though, she told my dad to pull the trigger and get my mom home, now.

The work travel people went to work trying to get my mom home. The earliest she could get home was 9-11. My mom flew home from China on 9-11. That in itself was a scary thought.

I mentioned I went in early on that Tuesday morning. I had gone over to see grandma the night before. While she wasn’t up and moving, she actually seemed better. Around 8:30 that morning I was sitting in a coworkers office who had asked about grandma. I mentioned I thought she was doing better. And then my phone started ringing. My heart sank. I knew what that phone call was without ever seeing who was calling me. I answered it. My dad told me that grandma had passed away. I grabbed my purse and told Joyce, please tell Dawn I’ll be back and ran out the door. Luckily my boss knew that minute might come and she was very understanding.

When this all happened, my mom was somewhere in the air between China and Chicago. My dad started busting his butt with the travel department’s help trying to get him on a flight to Chicago so that my mom didn’t have to sit in Chicago with a long layover and the news her mom had just passed away. We weren’t able to get him on a flight there. Mom sat in Chicago and got the news.

Jump forward 2 years. Just two. My husband, then he wasn’t, and I had just started dating. 9-6-2009 hubby left MO to head back to Kentucky where he worked. In fact, he left my house so late that night that he wound up staying at his mom’s house and getting up early on 9-7-2009 to drive back. He knew that his grandma was sick and wouldn’t last much longer. They had a big birthday party for her that year with that knowledge then.

Truth be told, I didn’t want him to leave that weekend. I wanted him to stay. Especially because he only came home every other weekend and I knew I wouldn’t be seeing him the weekend of the 11th. Hubby’s grandma passed away 9-11-2009. He jumped in his truck and flew back 7 hours to get home. While I didn’t like the circumstances that were bringing him home, I’d be lying if I didn’t say I was a bit excited he was coming home.

So to say 9-11 has multiple meanings would be an understatement. Today’s topic was Talk about your relationship. I decided that this was better to talk about… besides, who isn’t sick of reading about my relationship with my husband? I mean I’m not but I’m sure you guys out in blogland are sick of it. The story never changes… it just goes into more depth every time.