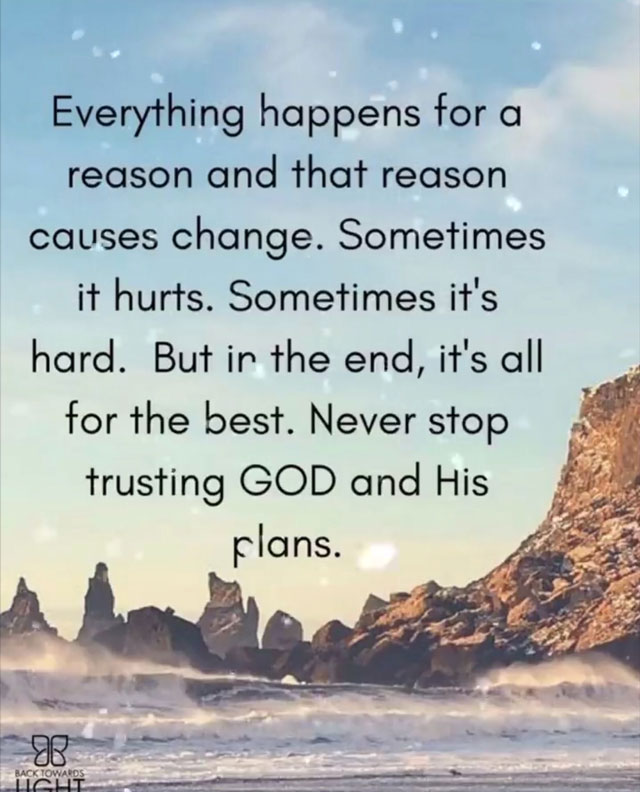 The picture above showed up in my Facebook newsfeed this morning. Now it wasn’t a still photo, it was a video, but it wouldn’t let me add the video, so you get a screenshot.

Those words, “Never stop trusting God and His plans.” Wow, they ring soooooooo true right now. Since December there has been a lot of ifs, ands, or buts in my future and it’s really been stressing me out. I’ve mentioned it a few times but said how much of a hypocrite I am because I wasn’t ready to talk but was asking for prayers. That’s the thing that annoys me the most when people do that. Yet, here I was, doing just that. Shame on me.

But one aspect that I’ve been dealing with, I’m finally ready to talk about. I told you I would and I’m going to try and do this as openly but as honestly as I can without whatever. I’m not really sure, I don’t want it to sound like I’m petty and childish or something. But… Here we go. Bear with me! I’ll give you some back details too. It’ll help fill in some of the dots missing.

When my parents bought the property they (we) live on, we became really good friends with the neighbors. At that time, we lived in a rental house just on the west side of the property. That house shouldn’t have had tenants living in it 20+ years ago, yet we did and more people have since then. Another story for another day.

Around 2009 he was losing the house to the bank. At that time, my dad told me I should have bought it. They wanted something like $67K for it. I was afraid then, being a single girl, that I couldn’t make the payments. The guy I was dating wasn’t close to even proposing to me and I wasn’t about to live with him, unwed. So I had no one to help with the bills. Needless to say, someone else bought it. Looking back, I should have bought it, but with what I made at the time, I couldn’t do it and didn’t want to get myself into a bind.

So now I’m married. I already own a house. We were trying to decide then if we really wanted to keep the house or not. No decisions were set in stone, but we were leaning toward, we wanted to sell it. We drove to my parent’s house one afternoon and saw a For Sale by Owner sign in the front lawn. It had a number. A few more times of driving by, we decided to stop and get the number. Dead end. The guy on the other end of the phone said he wished he had a house for sale but knew nothing of the place we were talking about. Weird.

Eventually, the sign came out of the front yard and it appeared people moved back into it. The same people who had already lived there. Oh, I didn’t mention that when the for sale sign came up, it appeared no one lived in the house. Okay, moving forward.

That guy came on to our property a few times. He was weird. He yelled at my dad about our property, and the fact that he came onto our property and my dad pointed out it was our property, not his. After he ripped my dad a new one, he did finally apologize. Then he stayed to himself for the most part.

One day while we still lived in our old house (which we sold in 2016 so it was before that), we were driving to my parent’s house. I should mention, there is no way to get to my parent’s house without driving past this house. So as we drove by, there were Highway Patrol and Sheriff’s all over that house and our rental house (the one on the west side of the property we lived in).

When we got to my parents, we told my dad. He drove up there to make sure it wasn’t our renters who were involved. At first, the Sheriff yelled at my dad about getting out of there. My dad was like, you’re on my property, those are my renters and I need to know if it is them you are after. He confirmed it was the neighbor. He had threatened to shoot his wife or something. Dad said all I needed to know and left. Later we found out this guy was a drunk. And at some point, his wife of 40 some years had left him. They got a divorce.

Although we all kept to ourselves, things still were tense. I guess that’s what you get with neighbors. But last fall, things got really interesting. We were out of town, coming in from Orlando. My parents had picked Tbug up because it was our weekend to have her. Tbug got up and went to the feed store with my dad. When they came home, there was police caution tape from the west side of that guy’s house, around both sides, and it ended in the fence row to the east of our rental house. So, read that as on our property. WHAT!

Later we found out that the neighbor was not only a drunk but diabetic and didn’t take care of himself. For whatever reason, he went walking and laid in our fence row, dying/dead for something like 3-4 days. The neighbor to the West of him found him. Oy! I guess even though he and his ex-wife were divorced, she must have still kept tabs on him or something. They called in a missing person’s report to the police. That whole week they were looking for him and finally found him in my parent’s fence row, dead.

This sounds like something strange out of a murder mystery or something, but I kid you not, this was happing in my own back yard. Literally.

And now, the rest of the story

Truthfully, we thought it would be a great house to buy. 3 bedroom, only 1 bath, 2 living rooms, a kitchen, a barn that had an apartment, and a shop. The apartment had a bathroom so I could survive. Now… the apartment wasn’t finished, there is a whole story there. The owner that lost the place in 2009, the apartment was his doing.

Anyway, we stalked this place for months. Doing everything we could to figure out if and when this house would be for sale. Finally a month ago, on our way to dinner, dad and hubby were talking about the house yet again. Hubby came home that evening and noticed that the house was going to be sold on the courthouse steps the following Monday. We tried everything in our power to get our assets liquidated because the internet said you had to have 10% down and the rest paid in cash in full by 4 pm that afternoon. Being 9 pm Saturday night and my dad going out of town on Sunday, things didn’t work in our favor. If we would have had a couple days, we’d have been okay.

We went to the sale anyway to see how much it went for. When we got there, the guy explained the rules. Turns out, if we had a verbal or written letter from the bank saying we were good for the money, we could have had it wired by noon the next day. My parents were in New Mexico. Dad had shut his phone off and didn’t get our call. We missed the house. The bank bought it back at the starting bid of $42,500. Well CRAP!

Enter in the post from last month where I was pouting.

I have a realtor friend who we involved in helping us since the bank won’t sell directly to a person, even if they are paying all in cash. Ugh! She tried everything she could to become the listing realtor of this place. Didn’t happen. CRAP! Enter in more pouting.

About 2 weeks ago, we were driving to town and noticed there was a notice on the front door of the house. Hubby went up to read and another realtor got it. He called the number and talked to the realtor. After that conversation, we didn’t see anything good coming out of it. Sight unseen, that realtor supposedly told the bank it needed to be sold as is for about $50-60K at the least.

We contacted our realtor friend and she told us that this realtor who was selling this house was a shady guy. Super.

Over the weekend, we found out the house was never listed and instead, this realtor guy bought the house. Mentioned to our realtor friend (I guess he doesn’t know we’re the same people who called him) that he already had people interested, the neighbors. He planned on offering it to us at $69K at the cheapest as is if he sold it. If not, he planned on fixing it up and selling it more around $130K.

In the last two weeks, other things have changed in our life (still not discussing that yet) and we’ve decided that we’re not really interested in that house. We decided we probably weren’t even going to try and buy it anymore. Yes, it would be nice to have, but at the same time, our interests have changed. But then we were annoyed to find out he planned on trying to make a quick buck off of us. We don’t totally believe that this house is worth $69K as is. It’s pretty rough around the edges and will take some elbow grease to get it clean, plus it doesn’t have central heat and air.

So I wish this guy luck. I’m interested to see if he gets what he’s looking for or not. But, like I said, while I’m not interested in discussing, our plans have changed so… don’t worry, I’ll discuss our new plans eventually when the time is right.

For now, I’ll hold on tight to God’s timing and know that what is meant to be will be. I’m glad God is on our side! And maybe here at the end I sound a little bitter, but I’m really not. It’s all in God’s timing. And it may be a blessing in disguise.