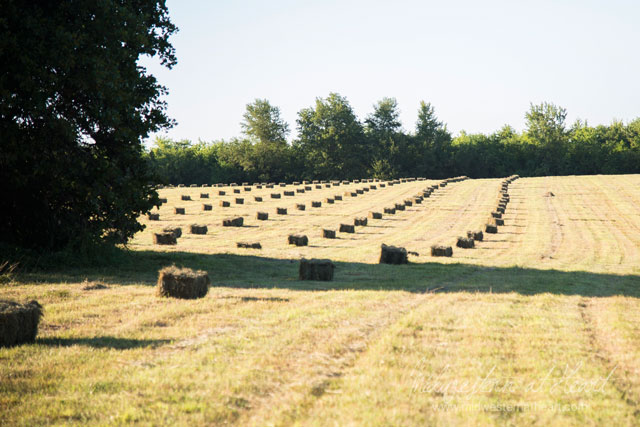 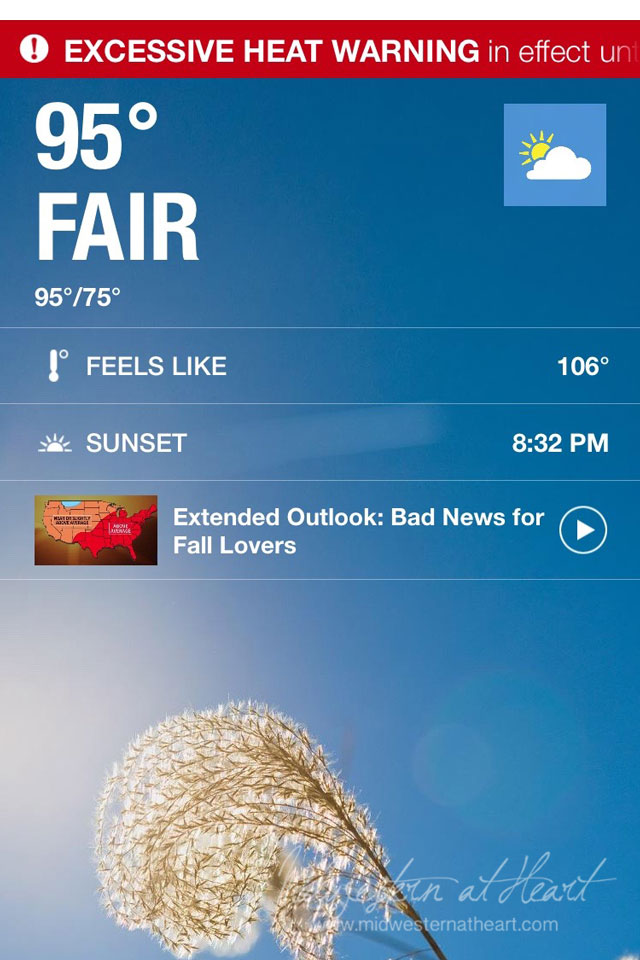 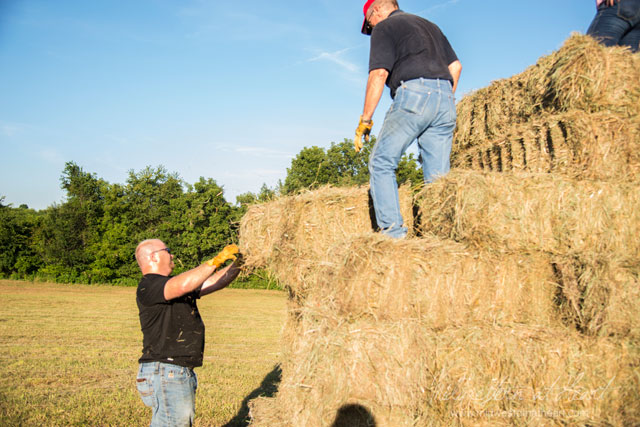 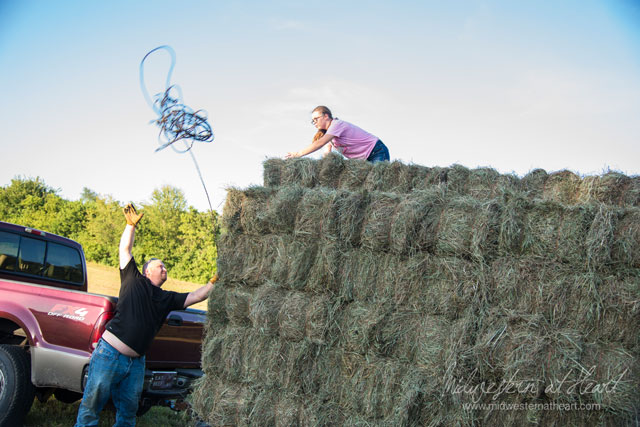 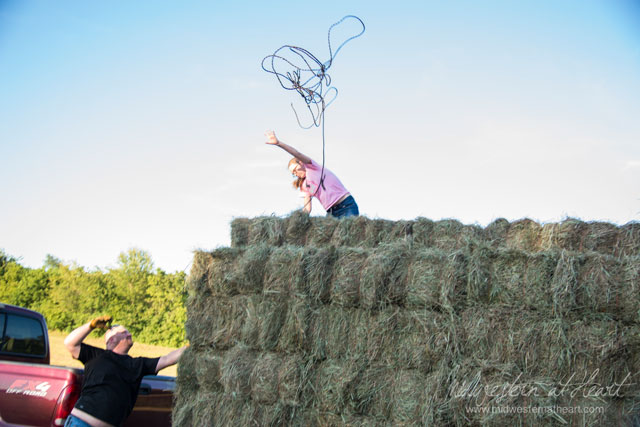 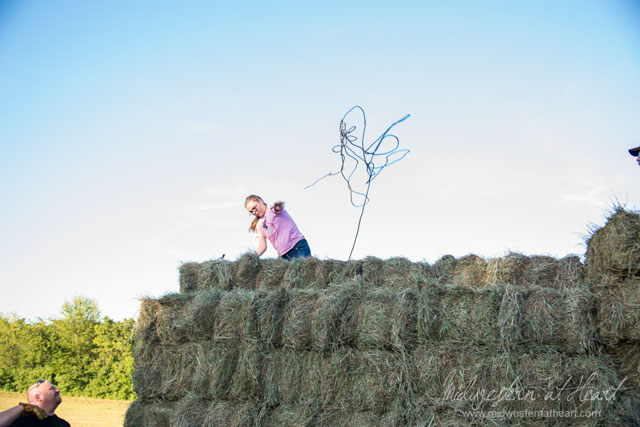 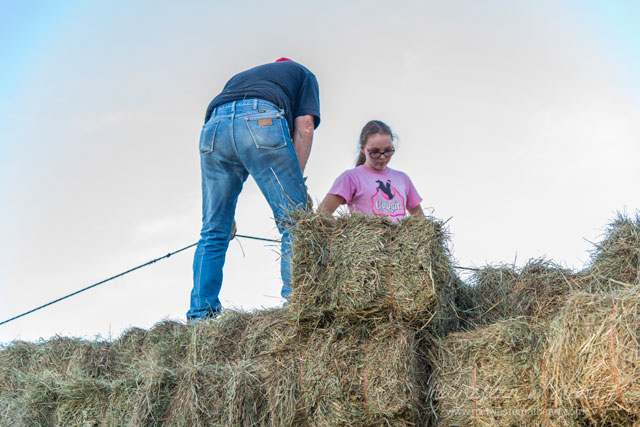 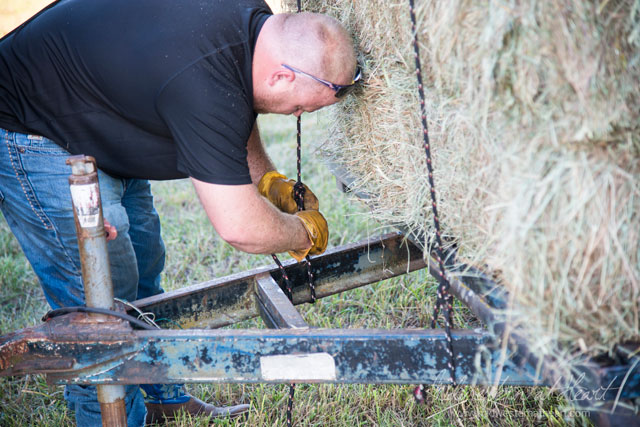 This might be a little blurry, but she’s smiling. She loves to go for rides! 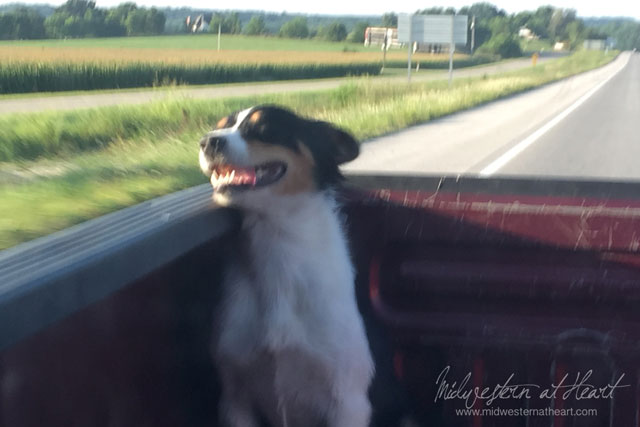 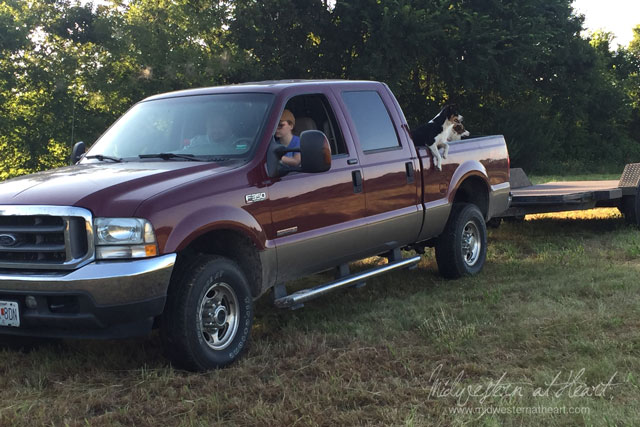 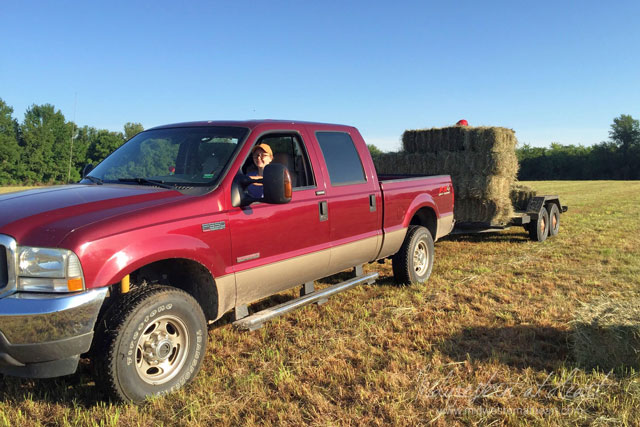 Yesterday, today, tomorrow, and the rest of the week really there is a percent chance of rain. The weather has dropped off about 10 degrees. Will it rain? Who knows. It’s a prediction. What someone thinks will happen. And one thing I’ve decided, although it’s not quite that easy, a weatherman/woman can predict the weather, be wrong 90% of the time, and still have a job tomorrow. It’s kind of a joke, but it’s a prediction.

No one can know the future for sure. Last Friday we got the word that the weather was good, all hay equipment was up and running, and we were headed to the hayfield that afternoon. This excursion was square bales versus round bales.

I grew up on a farm. Farm life is so unpredictable. You can try to make plans, but make sure you’re flexible. You have to be. Heck, I went on a job interview, dressed in a business suit and heels, driving out the driveway and there was a cow out. I had to put that cow back in before heading to the interview… in heels, in a suit. My mom came home from work once in heels and a business suit to start up the tractor and start baling until someone could come relieve her so she could change clothes. When you make money farming whether it’s your full time job or you have an outside job to pay for the farming adventure… farming is unpredictable. Another story, ok if you want one. The day I got married, a family member was coming to the wedding. When they went to leave, a cow decided to go into labor and they wound up having to pull the calf. They didn’t make it to our wedding. That’s okay. Stuff happens and as a farmer you learn to be flexible. You have to be.

Anyway, we had to pick Tbug up for our weekend with her. I made arrangements at the last minute to get her early, then we went to my parents house, did chores, waited for my dad and hubby to get home from work, and we headed to the hayfield. It was HOT. Oh it was hot. Although I’ve been in worse. We had 200 bales of hay to pick up.

In the state of Missouri, if a trailer doesn’t have lights on it, you can run during the daytime. I don’t know the exact law/rules. Our hay trailer doesn’t have lights. By the time we got our first 100 bales loaded and made it home and put in the barn, we had 2 options. Go back to the hayfield, load the trailer, and let it sit in the field until the next morning or go home, shower, eat dinner, go to bed, get up early the next morning and go back to the hayfield after the second 100 bales. We chose the second option. Either way we were going to be hot and sweaty the next morning putting that second 100 bales up in the hay loft.

Poor Tbug hasn’t lived down running our VW car into the back of the tractor 2 years ago. Friday night she got the best job of loading hay on to the trailer… being the top stacker! Depending on how many people you have depends on what jobs everyone does.

Friday night my mom and Abug drove, Hubby and I threw bales up onto the trailer, dad was the lower stacker, and Tbug was the higher stacker. The higher stacker has the easiest job I swear. I’ve been in that position many times. All you really have to do is catch, stack the top couple rows, and help with tying the trailer down. Sometimes it’s a toss up as to who has the hardest job between the lower stacker and the people throwing the bales up on the trailer. I’ve done all positions.

Saturday my mom had plans so I asked Tbug if she was going to drive the truck. That position might be the best… other than the threat is if the driver dumps the entire trailer, they get to restack it by themselves. I’ve heard that threat my whole life and yes I’ve dumped my fair share of loads. I’ve never had to restack by myself, but I have had to help restack. That really sucks!

Anyway Tbug told me no, she wasn’t going to drive. I asked her why? She jokingly said, there’s no tractor to stop me. Now the day she ran our VW into our tractor, it is a standard, she did have her foot on the clutch, we bounced off, I might have been 2 weeks from having Abug…., and she kept yelling she couldn’t see the break to which I kept replying, you don’t have to see it, you just have to hit it.

Anyway we finally convinced her that she could drive the truck, pulling the trailer. We left Abug in her carseat so Tbug wasn’t fighting her while trying to drive. And I want to brag, Tbug did an excellent job driving. I might pat myself on the back and say she learned from me. ha! Not to toot my own horn but I’ve been told I’m a good driver as well. You keep it slow and steady, between the rows of hay, ease on to the break, and don’t throw the stackers off the trailer. I have been thrown off the trailer more than once. It’s when someone slams on the gas or slams on the break and you can’t brace yourself. Luckily every time that’s happened I have hit the ground running.

But you can never say farming is easy or an 8-5 comfortable air conditioned job. I’m not sure if that’s what I’ve been trying to say more so than just trying to document life. And document Farm life. And happy days. Oh and Saturday after sweating, we took showers, and then went to the farm show and got soaked in sweat again. That’s all :).

Breaking a Calf to Lead
Sassy
Marlie Doesn't Share Bones
Merry Christmas to all and to all a good night!