It’s been a few years since I’ve been involved in a surprise party. If you recall, the last one started Tbug pushing/tripping hubby through a door (okay I might have been involved in that part too….) into a room full of people who were waiting to surprise him.

This time around though, hubby was involved in the planning or at least the execution of the party. Let me paint you a picture.

Hubby got off work and headed to Jared & Karen’s house. They were waiting for Grady to leave the shop so that we could start decorating for the party. Grady thought he was teaching a class at 6:30pm, but really we were having a surprise birthday party for his 60th birthday (which is today).

Finally Jared called and said that his truck broke down again and needed to be towed. Grady left the shop in a hurry. Hubby and Karen were in Hubby’s truck headed the long way to the shop. Deb, Chuck, SW, DW & I started prepping with decorations. When hubby got there he started putting Grady’s present together quickly while Karen jumped in and helped us decorate. 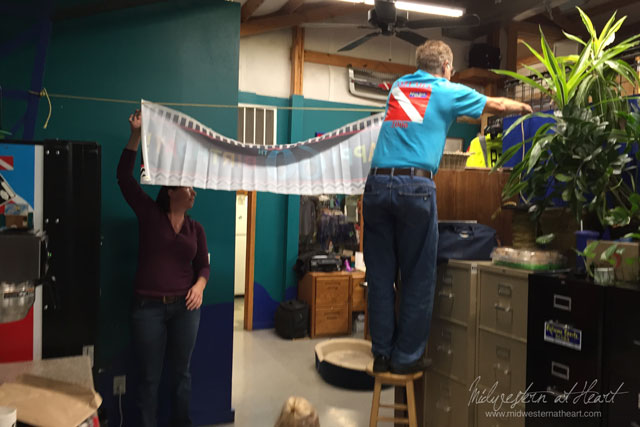 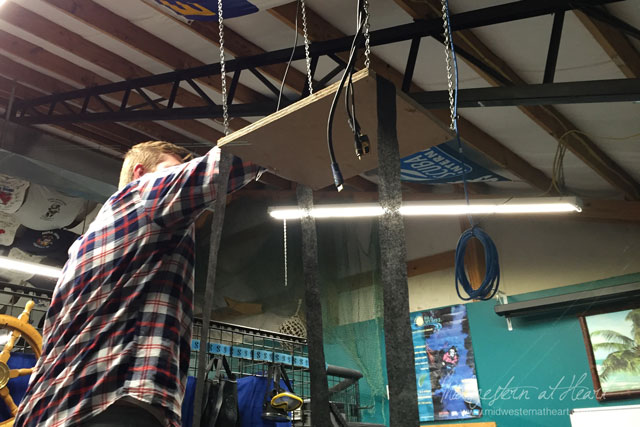 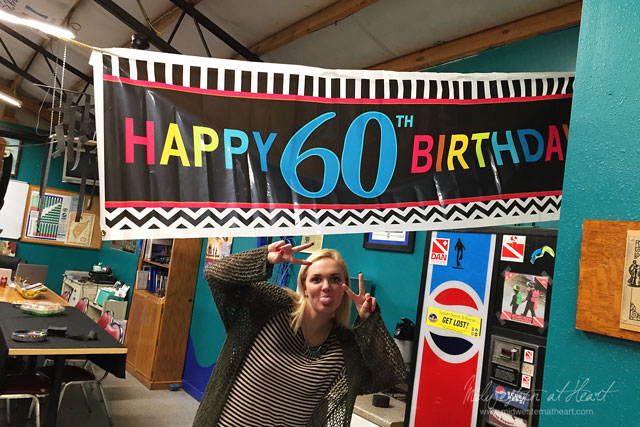 Jared sent Karen a text saying that Grady never drives that fast and he was having to ride his brakes to slow him down. Then they got the guy at the shop they were “towing” Jared’s truck to in on helping to stall Grady.

Meanwhile back at the shop people started gathering. Justin showed up when Grady left with the food, Deb put some dips together there, and we were trying to decide where to put everyone. This is the “Amish” Diver and his “Photobomber.” lol. 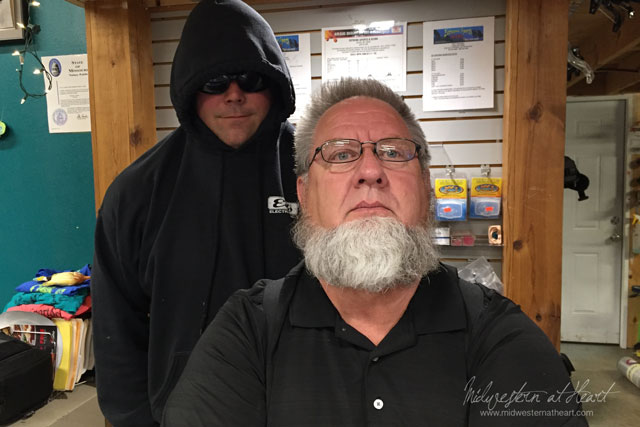 SW was looking for a picture for the cake. Grady walked in and she said that she was looking for a photo for a school project. He pointed out and helped her, then she looked at Deb when he walked out of the room and said, quick thinking on my part huh :). 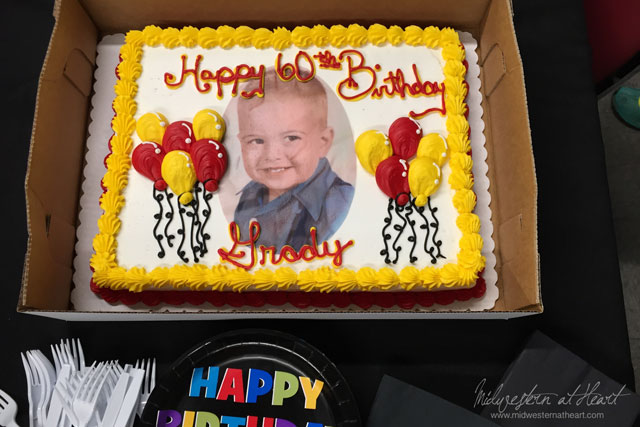 And then Grady finally showed up and was surprised. They tried to get him to go into the classroom to see the decor and he said he had to go pee. They guarded the back door thinking he’d try to sneak out. Deb said that he didn’t even show up to the last surprise party. 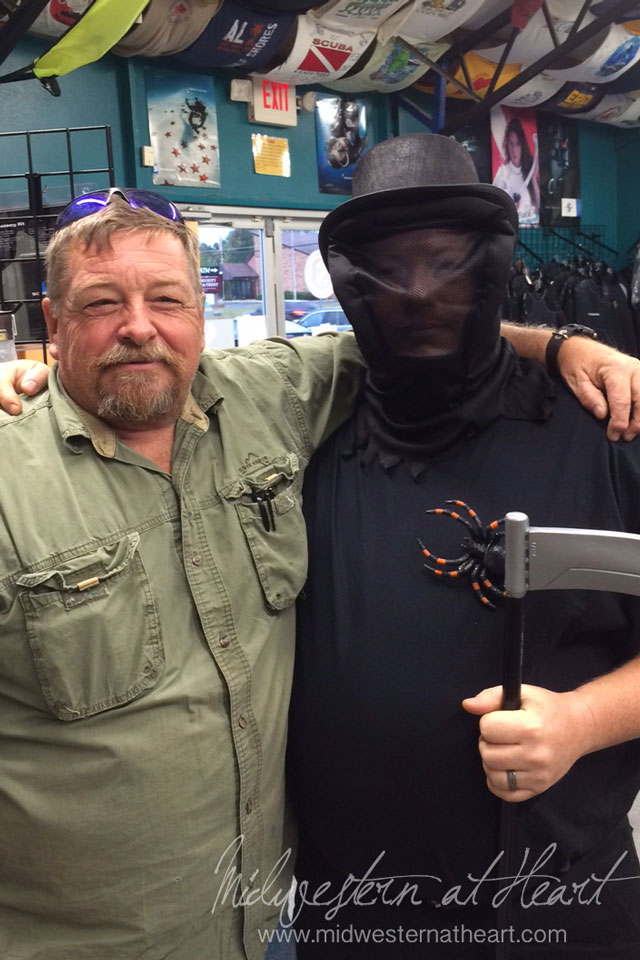 Then someone, no idea who…. got the brilliant idea to tape 60 candles together for Grady to blow out. A blow torch and 60 candles… yup, we moved outside, otherwise we might have set off the sprinkler system. 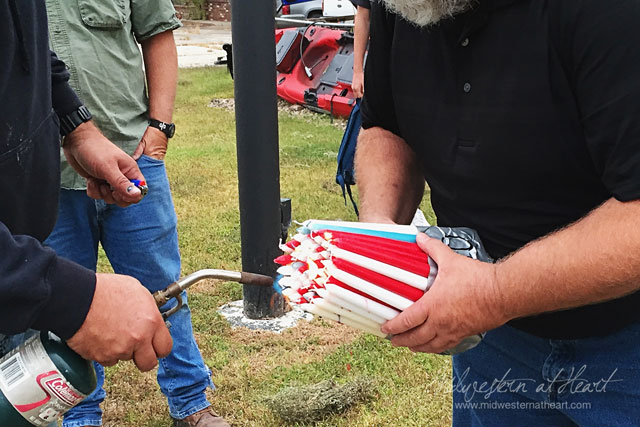 Hubs got stuck between Tiff and me. We had a few more pictures… this was the most sain one. ha! 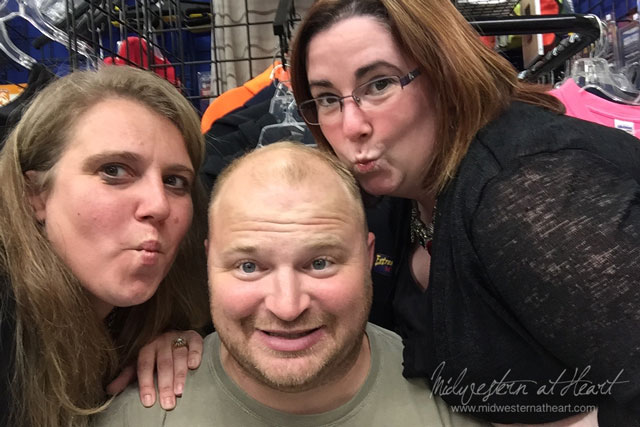 Then it was time for presents. Grady said he didn’t know they still made Geritol and Caster Oil. I don’t even know what those are or what they’re for. Nope, don’t tell me, it’s fine that I don’t know :). Oh and he may or may not have gotten a thong speedo. They told me I would have to take the pictures of him in it when he modeled it since I’m the Photographer. I told them I didn’t know anything about taking pictures. 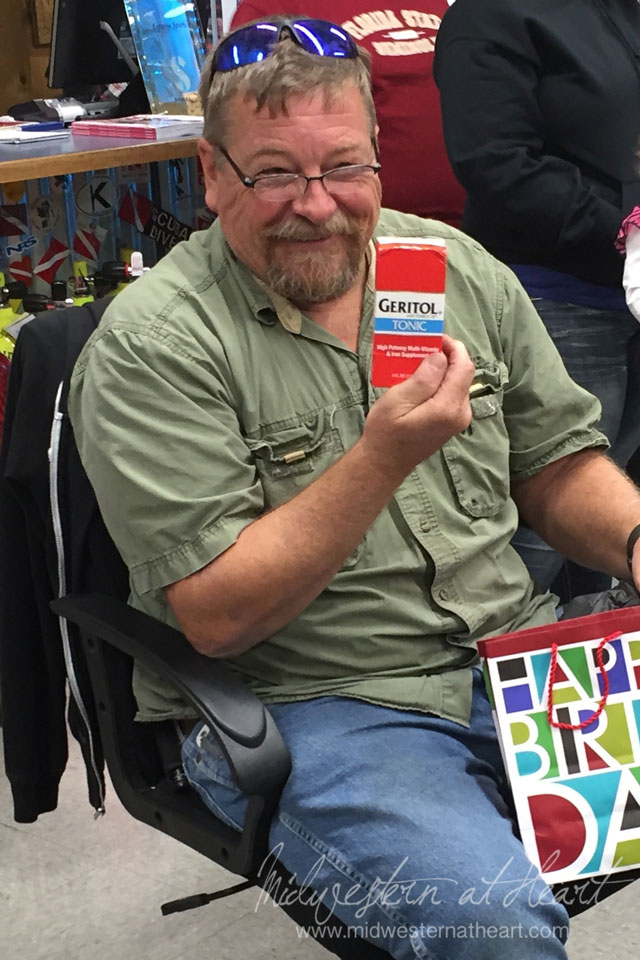 He was a bit nervous looking in this pouch. I think this was the Caster Oil…. 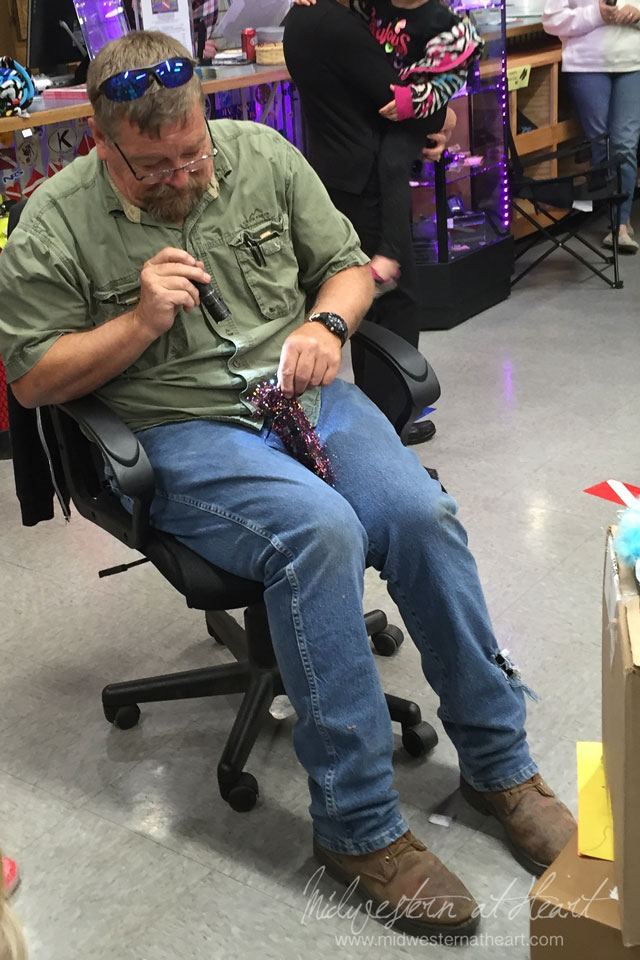 As a Red Coater they fix up backpacks for kids in the surrounding area to have meals for the weekend and sometimes box up boxes for adults 60+years old. Recently they did the boxes so Dan took one of the labels and went around town collecting the stuff for Grady’s 60+ box. 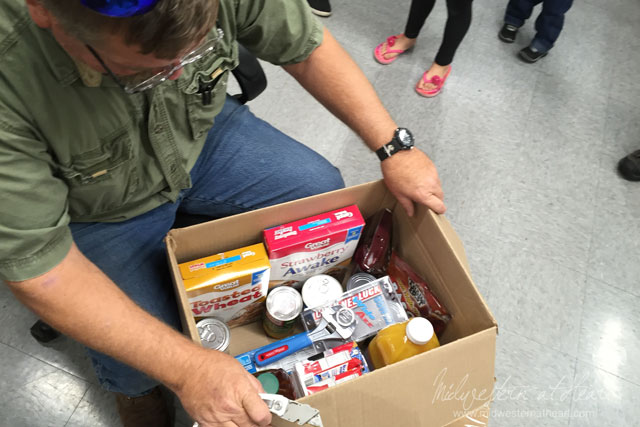 CL made Grady a card. Then when you thought he’d say “You’re Welcome,” Kiran said, “You’re” and CL said “Old.” Everyone laughed. It was cute. (Oh and Abug got her first kiss… I’m still waiting on that picture) 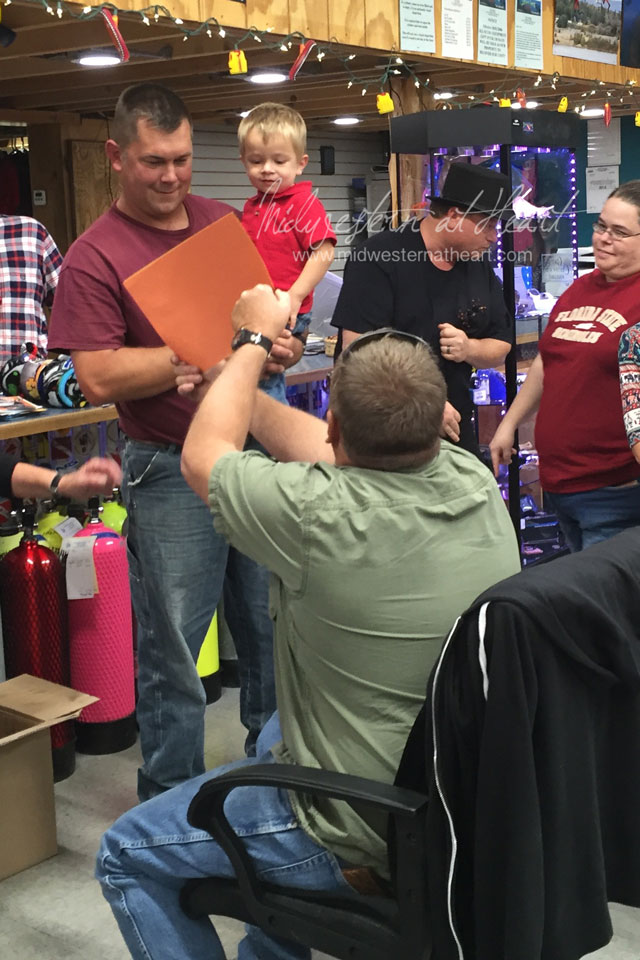 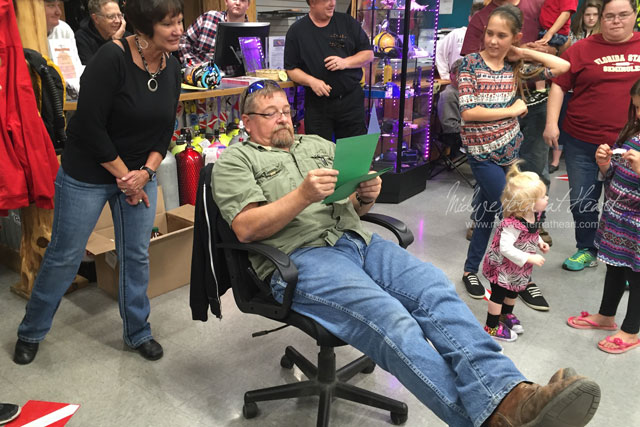 And the present that hubby was putting together while we were decorating. This is a pony bottle that is used for solo diving. It was originally yellow, then he spray painted it orange. Then the orange chipped off and it just looked awful, so Jared and hubby took it to a car body shop and had them paint it Chief’s Red, the bracket the goldish/yellow color and then had our friend Chris make decals for it. And bam, this beauty appeared. 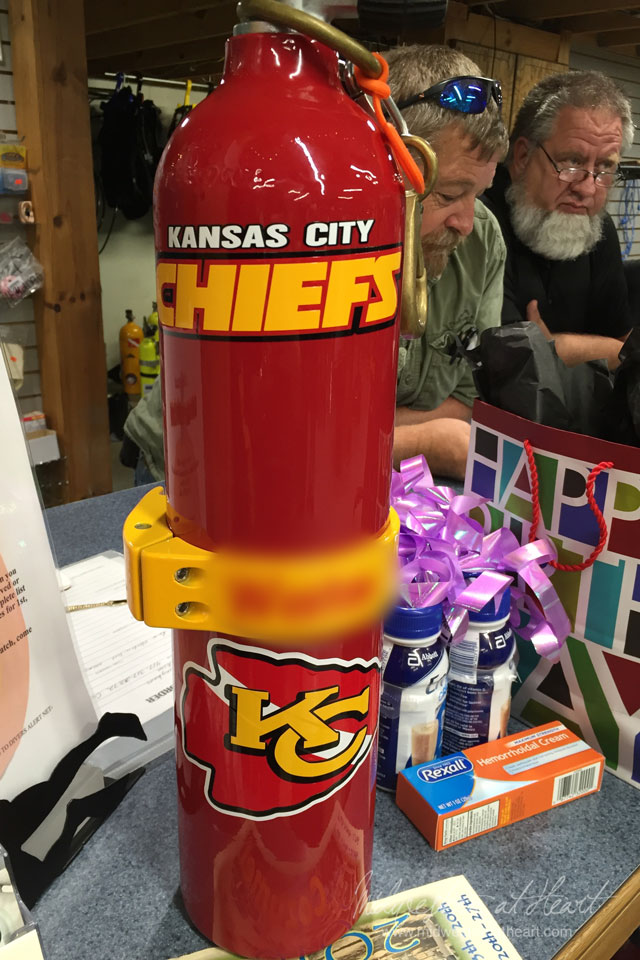 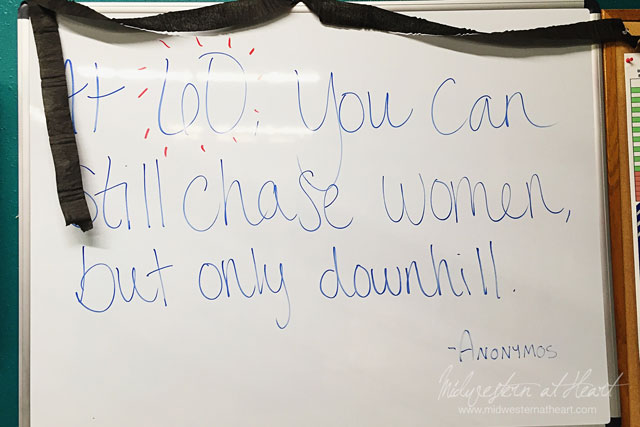 And at the end of the night, they left the candles burning and here was the wax river that formed. 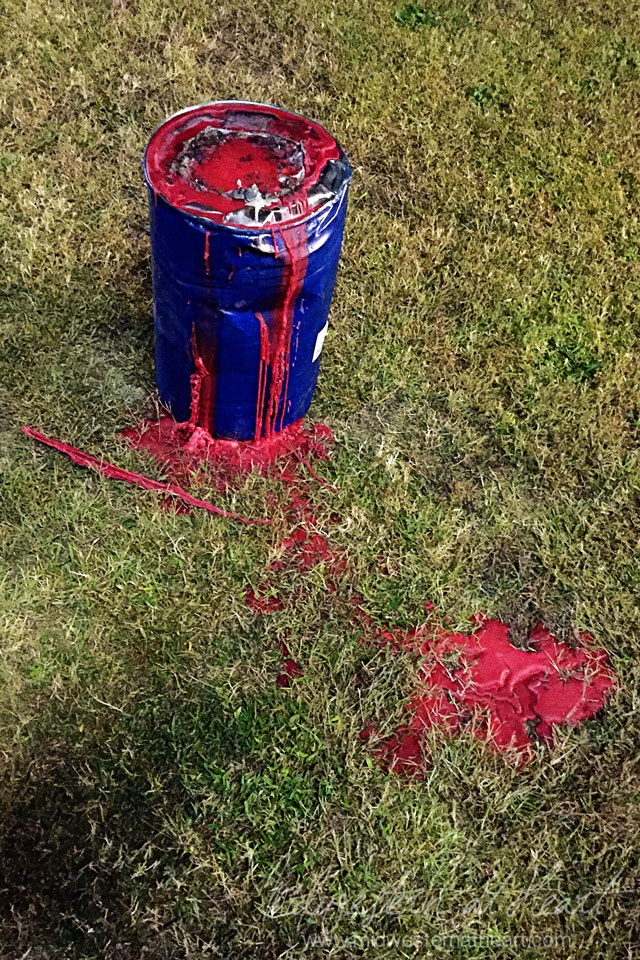 Note on how to make friends: So we went out and were admiring the wax river, I got a piece and carried it into the store. So then I poked one of the kids in the shoulder with the tip showing him how much fun he could have with it, then I poked myself in the shoulder. Next I poked Karen’s upper arm and the tip broke off. I looked at her, laughed, said I shouldn’t be allowed to play with wax and went and threw it away. That my friends is how you make friends :). So who wants to be my friend now?

Today is Grady’s birthday so Happy Birthday Grady. Hope you enjoyed your surprise birthday party! It was Dan’s idea!